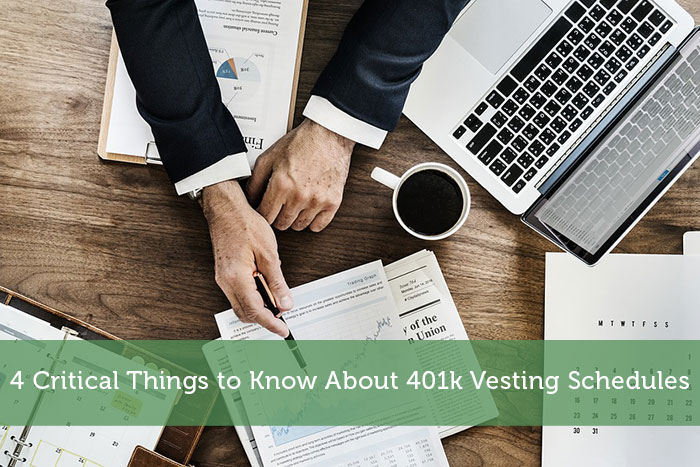 A 401k is an employer-sponsored retirement account where employees can contribute a set amount or a percentage of their wages into an investment account which can then be used later for retirement. The investment options will vary based on the employer, but will typically include a range of mutual funds or stock options.

While not required, many employers match a portion of employee contributions. The matching contribution is often set as a percentage of wages up to a maximum percentage.

The employer contribution is a significant benefit provided by an employer. It is money above and beyond the employee’s wages and it is provided as an incentive for the employee to both plan for retirement and to stay employed at the company.

What Does it Mean to be Vested?

Vesting is a process in which something is earned. In the case of a 401k, this term applies when the employer contribution transfers ownership from the company to the employee based on achieving a specific goal.

Vesting schedules vary from company to company. They are set at the time the company creates its 401k plan. The vesting schedule is included in the plan documents. Most companies distribute summary plan descriptions (SPD) instead of the full plan because the full plan is very long and consists significantly of regulatory information relevant to the company’s management of the plan. Much of the content in the plan document would be useless to employees.

In 401k plans, it is far more common that number of years of employment are rewarded by a vesting schedule that gives full ownership of the employer contribution after a set period of time.

Three-year cliff vesting is another common vesting schedule found in small businesses. These plans have zero percent vested until the third year, and then after the third year of employment, the employee is fully vested.

Graded vesting schedules have a set percent vested annually over a period of time. For example, 20% per year. After five years the employee is fully vested. In some cases, the employer may have a one-year deferral in matching and then start the graded vesting which would mean that the employee would be fully vested after six years. With graded vesting, the percentage of the company match that is vested applies to each dollar of the company match at the time the goal is reached.

When an employee leaves a company before becoming fully vested the amount in his 401k will be decreased by the amount that was not yet vested.

For example, let’s look at the following circumstances:

The entire $6,000 is included in the employee’s account balance.

After two years of employment, the employee is 40% vested.

*The account balances in these examples exclude any earnings or losses from investment.

When the employee leaves the company, he or she can leave the funds in the 401k or roll them over into another retirement savings account such as an IRA or a Simple IRA.

401k is a Great Way to Save For Retirement

Regardless of the vesting period set by an employer, any company match into an employee’s 401k is a huge benefit. Even in the cases where employers do not match contributions, 401ks have significant benefits. Contributions made into the retirement account are taken directly out of an employee’s paycheck pre-tax. Those funds then continue to earn a rate of return and those earnings also grow tax-deferred. Obviously, at the normal retirement age per the IRS, there will be taxes due when the employee becomes a retiree and starts withdrawing money from his retirement account. Ideally, his tax bracket is low due to earned income being lower during retirement.