How a Catalyst Turns into Dollar Signs

Those of us that have been around the block in the investing world know that there are several important signals for investors to watch. One of the most important of these is known as the catalyst. At the end of the day, catalysts often turn into dollar signs. That is, if you know how to take advantage of them. Today, we’ll talk about what catalysts are and how they can turn into dollar signs for the savvy investor.

What Is A Catalyst

In the world of investing, the definition of catalyst morphs to “news or information that causes movement of the price of a security or other asset.” So essentially, just about anything surrounding a publicly traded company or even an economy could be a catalyst. Some of the most common catalysts include…

As you can see from the examples above, there are two different types of catalysts. They are coming catalysts that are expected by the markets like economic and earnings reports, and unexpected catalysts like rumors. Here’s how to find these and turn them into profits…

In order to take advantage of catalysts in the market, you’re going to need to be able to find them. One of the best ways to go about finding coming catalysts is to look at both economic and earnings calendars. These calendars work just like any other calendar. They list the days and events that are going to happen on those days, as well as the times the catalysts will be released. Economic calendars are free for the most part and all over the web.

To find and take advantage of a coming catalyst, use your favorite earnings or economic calendar. Take a look at coming events and pick the one that you believe will cause incredible market movement. Prior to the event, take a bit of time to prepare by opening your trading deck, trading chart, and news source. Then, when the news breaks, take a moment to look over the news while the trend defines itself. After 3 to 5 minutes, a clear trend should become apparent. Now, all you’ve got to do is make trades to take advantage of the trend in front of you!

A great example of an expected catalyst happened today. Earlier today, just after 2:00, the US Jobs report was released for the month of January. The report showed that in the month of January, the United States added more than 40,000 more jobs than economists expected to see. As a result of the positive economic data, indices in the United States saw gains. This can be seen clearly by looking at the chart below! 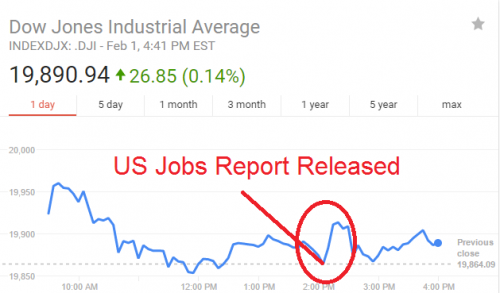 Staying On Top Of Breaking Catalysts

The way I go about doing this is through the use of Twitter. To do so, I follow several market leaders on Twitter. Leaders like Quote The Raven, Open Outcrier, and Adam Feuerstein are incredibly active on Twitter and constantly looking for the next catalyst to share. By following market leaders, you’ll get signaled when something happens that’s likely to cause big, unexpected movement. From there, all you need to do is make trades to take advantage of the trends pointed out to you.

While no news was expected surrounding Air Methods today, the stock did see an unexpected catalyst. Around 2:00 a rumor broke on Twitter that the company was exploring the idea of selling itself. Of course, if this were to happen, it would generate incredible value for shareholders. So, the stock shot upward in a massive way. Take a look at the chart below to see the result of this unexpected catalyst. 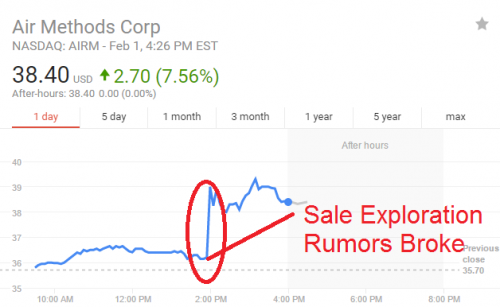 Being Patient Can Save You From Losses

Knowing When To Quit

Finally, it’s important to know when to exit the trade. As you can see from both examples above, investors tend to overreact to catalysts. So, what happens is that the stock or index will quickly shoot up, far and above what it should. From there, it corrects. Make sure you sell as soon as the correction starts, it won’t always recover and make it’s way back up!

As a new comer, I had no idea what a catalyst was. However, the understanding of catalysts has completely changed the way I trade, leading to larger profits. The same can happen for you!

Joshua Rodriguez is the owner and founder of CNA Finance. His experience in market analysis is vast, earning him positions as a contributor to top websites like Equities.com, Benzinga, and several others. When he's not working, Josh enjoys time with his wife, 3 year old daughter, 8 year old son, and five large-breed dogs who tend to keep his schedule booked. To get in touch with Joshua, contact him on Twitter or email him at CNAFinanceHelp@gmail.com.