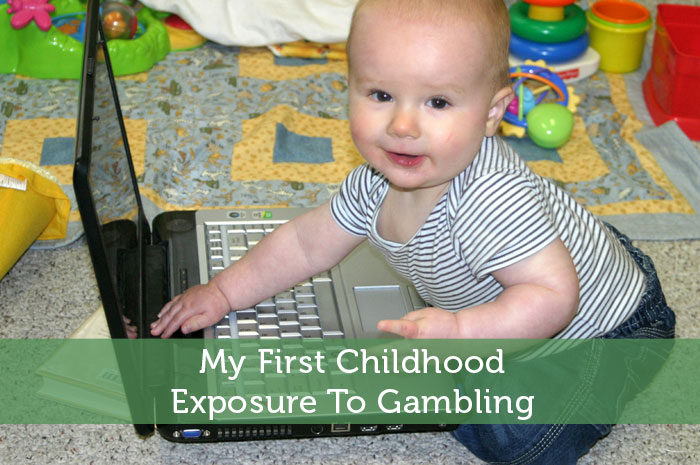 I’m not sure when the average child gets exposed to gambling, but I personally got a fairly young start.

No my parents didn’t drag me to the casinos or horse racing track as a toddler. Instead I took the initiative with getting into gambling on my own.

My Early Adventures With Scratch and Win Tickets

I must’ve been only 6 or 7 at the time, but I clearly remember walking into that corner store with my $5 in hand. My best friend had let me in on a little secret – this particular corner store owner had no problem making some extra money by selling lottery tickets to minors. I guess in the poorer area of a small town, people can easily get away with things like that. Seriously though, profiting off kids like that?! Come on man!

So without hesitation this guy hands over my five gold rush scratch and win tickets. Here I was thinking I was being a smart entrepreneur. If I was buying five of them, I thought I was almost guaranteed to win. Little did I know that the system is designed to make the government money, not to make all the suckers rich.

Eagerly I got busy scratching those tickets, eyes lighting up as each time I would get two matches and came oh so close to getting that 3rd match. You know the ones where you have to count all the zeros just to make sure.

Well as ‘luck’ would have it, I scored big and won $2 with my big purchase. And with that I was hooked.

Like any young entrepreneur, I didn’t see that as recovering $2 off my little investment. No I had just scored two more chances to win big. Let it ride baby! Of course, I lost on those next two tickets, but in my mind I was just two tickets closer to my big jackpot.

Luckily over the next few years I usually didn’t have that kind of spare cash and candy was usually the bigger priority. Still, once in a while I would fulfill that gambling itch and head over to that unscrupulous corner store.

Moving On To Sports Card Collecting

Now some of you might be saying to yourself that buying sports cards is just collecting, but there most definitely is gambling elements involved.

It started out innocently enough. As a gift I had received one of those hockey sticker books where your goal is to collect the entire set. So when I got a bit of money for chores around the house, I’d buy a pack of these stickers hoping to get the ones I was missing.

As my allowance gradually increased, I moved on to actual hockey cards. I would start with the cheapest I could afford, but I’d eventually get lured to the more expensive ones. It was still essentially just collecting and harmless enough. At least it was better on my teeth to spend my money there instead of all on junk food.

The problem arose when I got into buying the top of the line cards. In these sets there would be cards worth much more money. So you’d really get caught up chasing those illusive top dollar cards.

There would be times when I would be lucky enough to find a mid-level card in my pack. Not surprisingly, the sports card store owner was another of those types who profits off of ignorant kids. He’d pay attention to when we found the cards worth more than a buck or two. He would easily convince us to trade those good cards for another pack or two. Just like the scratch and win tickets, I was all too willing to let it ride in hopes of getting that top value card. Hey, at least, I was building my collection, right? Unfortunately with the store owner’s help it was a collection of mostly lower end cards.

Returning To My Childhood Gambling Roots

Eventually I outgrew collecting hockey cards and went back to spending money on junk food again. Well wouldn’t you know, that corner store owner had no problem with selling me scratch and win tickets too. This time around it was the bingo scratch and wins that my friends and I got hooked on.

For some reason there just seemed to be a high percentage of winners when those originally came out. In other words, someone in marketing was smart enough to get people hooked on this new popular game. I think they realized that the longer the process, people would get more entertainment from it and later use that as justification to keep playing.

Over the years, I would keep playing, thinking that I was just increasing my odds of winning one of those bigger prizes. I would upgrade to the $5 bingo cards thinking that just increased my potential winnings that I was due for. I don’t think I ever won more than $20.

To this day I still buy them once on a while, but I look at it as entertainment now.

I found the most interesting stats about childhood gambling on an Oregon website (page since removed). Here are some key points:

“Research indicates that 60-90 percent of youth engage in gambling, and that youth problem gambling rates are 2-4 times higher than those of adults.”

“The 2006 report by the California Attorney General’s office concludes an alarming number of problem gamblers, nearly half, are youths.”

So what is your take on childhood gambling? How young were you when you got your first taste of gambling? Do you think there needs to be tighter restrictions on youth gambling?