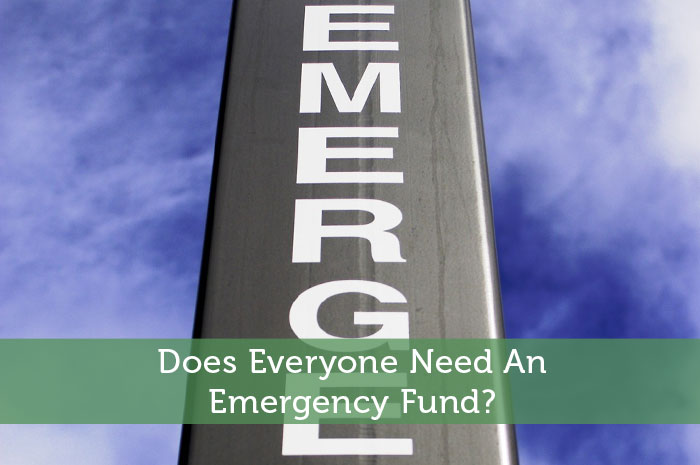 The great thing about personal finance blogs is that you can find all kinds of personalized advice for a wide variety of scenarios.

Unfortunately the line between personal advice and general advice often gets blurred.

Some advice gets repeated over and over so much that people just start to assume that it is one size fits all advice. They forget that everyone has a unique situation. Not everyone should be following Dave Ramsey’s plan.

Usually it is the ‘rules’ about credit card usage that I have the biggest beef with. In my opinion another major offense is pushing everyone to maintain a large emergency fund. I just can’t wrap my head around the concept that apparently everyone should tie up a large sum of money in a low interest savings account.

While it does make sense for people with debt problems, it just doesn’t seem logical for anyone with decent credit. In such cases a small emergency fund should be adequate.

Why It Is Necessary For People In Debt

For people with debt problems, they usually have limited options to find cash to pay for various emergencies that arise. A lot of the time those emergencies would need to be covered by credit cards or other high interest options.

Obviously this would put them further into debt and would be a psychological punch to the gut. They would feel like so much of their progress had been wiped out. It would get very discouraging knowing that there might be more emergencies around the corner putting them back to square one.

An emergency fund would ease a lot of that concern and give them some breathing room. With emergencies taken care of, paying off their debt seems like a much more attainable goal.

When you have decent credit, you do have a lot more options to come up with some cash. You’re not stuck paying high interest if some emergency occurs and you don’t have cash in your bank account.

The easiest option for me would be my line of credit at my bank. I’ve been gradually negotiating a lower interest rate on this line of credit as my credit rating keeps improving. At any time I could transfer over a sizable amount of cash without paying massive interest on it.

Through my bank I would also be able to apply for a personal loan at any time. By providing collateral I would be able to get an even lower interest rate than my line of credit.

Then there’s my personal favorite option…credit card balance transfer offers. There are countless credit cards that I could apply for and get 0% interest for up to 15 months. Or my existing credit cards frequently offer 1.99% or 2.99% deals. Basically an emergency could be covered with minimal interest.

Of course each of these options would take a different length of time, but it would be easy enough to bounce the balance around until the lowest interest option is available. I could even put the initial charges on my high interest credit card for the remainder of the billing period. That way I’d also get some cash back rebates.

Using Investments Instead of Savings Accounts

The investment side of this equation is something I am still working on. I’ve been blowing money on mutual fund fees for a long time. My investment portfolio is finally getting to the point where I can switch to self managed investing and save on the fees.

I am confident that I should get much better returns than the best bank savings account. If I can’t manage that, I’ll just have to barter SEO tips for additional investing tips from some of my investment blogger friends.

Once that gets rolling, I just couldn’t imagine keeping more than a few thousand dollars in a savings account earning significantly lower interest. The difference in ROI would be huge if we’re talking an emergency fund equivalent to 3 to 6+ months living expenses. The key is that some of those investments can be liquidated if absolutely necessary.

So why would I leave money in the bank for so called peace of mind? The logical side of my brain would be pretty pissed off at the emotional side.

What If Something Really Bad Happens

Personally there are very few emergencies that I wouldn’t be able to cover with my small emergency fund and credit. It could be done in such a way to avoid most interest charges. The bit of interest could be offset by the higher investment returns.

Worst case scenario, the emergency was so dire that I couldn’t pay off my balance transfer before the 0% offer expires. In that case I would either transfer the balance somewhere else or resort to selling off some of my investments. That would depend on how much longer I needed to pay it back.

In my situation I do happen to have online income to fall back upon if I were to lose my job. So I do have extra cushion there. I also have other assets that I could sell off if it ever came to that. Plus I’m Canadian. So most potential medical expenses would be covered.

What About During a Recession

One comment on that post got me thinking a bit more though. He brought up the possibility of a big emergency fund being very beneficial during a recession. He reasoned that it could be used to buy up low priced assets. The problem is that the people who feel the need to have a big emergency fund aren’t likely to part with it so easily. Also, are those potential gains bigger than all the interest they missed out on prior to that? Honestly, I don’t know. Do you?

During a recession this emergency plan would be more susceptible since selling off investments would likely be at a loss. For me personally I feel that the risk is worthwhile. Chances of a major emergency affecting me during a recession is rather slim.

Obviously this strategy isn’t right for everyone. If I didn’t have good credit, I wouldn’t take this approach. If I had kids to take care of, I’d probably take a more liquid approach. Not having investments to fall back upon would change things too.

I just don’t feel the need to follow advice just because lots of people repeat it, especially when the advice doesn’t seem logical to me.

What about you? Who else out there doesn’t have a traditional emergency fund? For the people with tens of thousands sitting in an emergency fund, do you ever get tempted to invest it instead? Does anyone completely disagree with my approach?