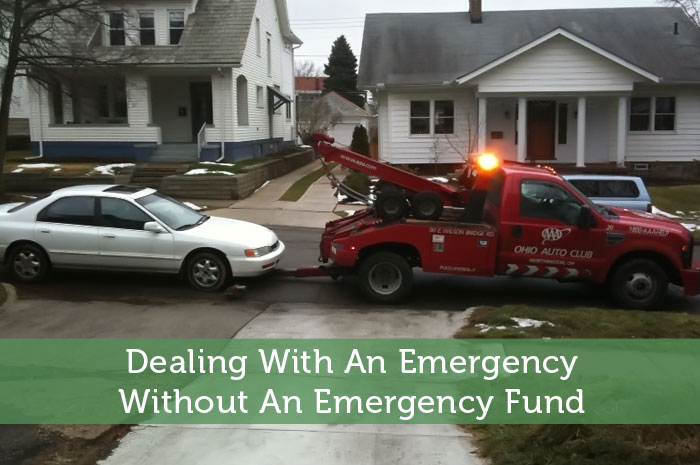 As you may recall I wrote a post about emergency funds a while back and why I choose to not have one. Instead of having a chunk of cash for emergencies I instead have an emergency plan. It may not work for everyone, but it works for me.

Recently I had the misfortune to put that emergency plan to test as I was hit with a big unexpected expense.

So it all started as I was driving back from a camping trip with my fiance. The trip was going quite well despite some heavy rain on the first day…luckily we had plenty of tarps between us all. Alcohol tends to help make the most of that kind of situation too, but that’s another story.

Anyways, as we were driving back I happened to notice my car was spraying a lot of water behind us. I figured that after the rainy weather there was just a bunch of water all over my car. Still it was strange that it was continuing even after the weather cleared. As a side note, I admit I’m far from being mechanically savvy. When anything needs fixing on my car or if it needs an oil change, I pay someone to do it. It may not be frugal, but time is money and I don’t have the time to learn that stuff these days.

Well as the water continued spraying I was getting a little concerned, but there wasn’t much I could do about it. That was when I got the more obvious sign that something was wrong…the dreaded dashboard warning light. Turns out the car was overheating. This can’t be good.

Now I know enough that I’m not supposed to keep driving if my engine is getting overheated. So I pull over and pop the hood to pretend I know what I’m looking for. Fortunately we were on Vancouver Island where people were friendly enough to try to help. The first guy that pulls up behind us poked around a bit to see if he can see the problem. He noticed that the coolant was leaking and recommended that we fill up with water for now. He also insisted that we should try to get it fixed asap rather than trying to drive all the way home. As much as I’d like to do that, it was a Sunday and all the mechanic shops were closed. We just hoped that by continuously adding more water we could make it all the way home without needing to get a hotel and missing a day of work.

Obviously that turned out to be the wrong decision, otherwise there would be no big emergency expense to tell you about. We even tried to get a mobile mechanic to help us out, but the ones we talked to couldn’t make it out to us. As we were about twenty minutes from home things went from bad to worse. Despite the engine temperature gauge not giving any warning signs, my car’s engine suddenly gave out. That part could’ve been a lot worse, but I had happened to get off the highway to call a tow truck anyway. By then it was too late.

Of course I was extremely pissed off – mostly at myself for knowing better. I knew that it was completely my fault that I had likely caused some major engine damage. My only hope was that the damage wasn’t as bad as I assumed.

The mechanic made my day when he thought it was something more minor. Here I thought I had gotten off lucky. That is until I drove the car home and noticed excessive vibration. I ignorantly guessed it was air bubbles or something else that would go away. Eventually I had to take the car back in as it become evident that the vibration was not going away. Ok maybe the pool of coolant in my parking spot woke me up too.

At this point I was pretty sure that the damage was more serious. I wasn’t getting off lucky with some minor repair this time. Rather than replacing a small part, they convinced me I needed to swap out the entire engine. They could’ve tried repairing the problem, but it would’ve been a similar price and it likely wouldn’t be the only thing wrong. My heart sank as I realized how much I’d have to spend and also how the low mileage on my car was about to disappear.

$3000 later my car now has a used engine installed and is running great. I just wish I had the common sense to not drive it so long and cause the additional damage. It was a learning experience to say the least.

Dealing With the Emergency Expense

Now some of you might be saying that repairing a car isn’t really an emergency. Normally it wouldn’t be for us since we both take public transit to work. The timing of this emergency was a problem though. We were going to be moving to our new condo the next weekend. We were going to need a car to move small stuff and valuables, as well as to pick up groceries and do other random errands. Maybe we could’ve just rented a car, but to me that would’ve been a waste. Might as well take care of the problem.

The timing also meant that my cash was all tied up in the condo down-payment and the various expenses of buying a home. In short, it wasn’t exactly what we wanted to be dealing with as we were about to buy a new home….not to say that we’d want to deal with any other time. At some other time it would’ve been easier to deal with though.

If I was like most other finance bloggers I’d have an emergency fund on hand. That way I could just dip into those funds and have it all taken care of. To me it just doesn’t seem logical to have that kind of money sitting in a bank account though. Why waste money sitting around collecting minimal interest when it could be used more productively? That would’ve been a big chunk of money that I couldn’t use towards my condo down-payment.

I won’t deny that having that big expense was fairly stressful, but I knew that I had the credit available to cover it. So I wasn’t going to let this totally kill the excitement of getting close to being homeowners.

My first line of defense was my MBNA cash back credit card. If I was going to pay a big expense, I should be getting some cash back on that. By putting it on my credit card, I also bought myself some interest free time. I just had to clear the balance by the end of the month.

If we hadn’t just moved, it would be easy enough to get the cash to clear that credit card balance in time. Since there was all kinds of other expenses popping up, it meant resorting to using my line of credit. So before interest started accruing on my credit card balance, I simply withdrew money from my line of credit. Since I periodically ask for a lower interest on that, I was able to prevent paying any big interest charges.

I recently paid off that line of credit. The interest charges were less than $9. I know that if I had that kind of money sitting in a bank account for a while, I’d easily lose way more interest than that. Most people have substantially more money than that in their emergency fund. They’d be missing out on even more potential returns on that money.

So several days after my fiance paid off her credit card debt, I got to pay off this debt of my own. Ok her accomplishment was much more impressive. Congrats sweetie! My experience did reinforce that I just don’t need an emergency fund at this point. I may increase my bank account buffer a bit now that we’re homeowners, but it definitely won’t be a large sum of money.

What about you? How did you deal with your last emergency expense?