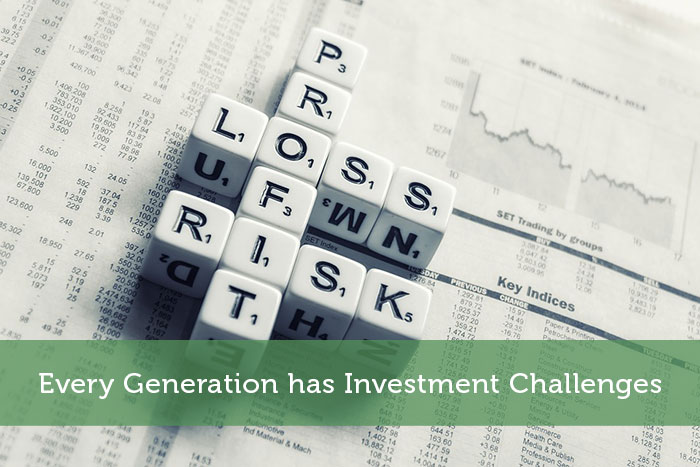 Does the millennial generation have it worse off than previous generations? The answer depends on who you ask. Even the millennials themselves can’t come to a consensus with this complicated and nuanced question. It’s hard to judge quality of life, financial freedom, and success across the board of a certain group of individuals because everyone experiences life differently. There are certainly a fair amount of challenges for generation Y, but every generation usually endures some kind of unique hardships when it comes to finance or careers.

In the 1980s the baby boomer group had to contend with extreme economic conditions where inflation was high and interest rates were rising. At one point a 30 year mortgage would cost over 15% annual interest rate. Even though the home price to income ratio was more affordable back then compared to now, the expensive cost to borrow money made it challenging for homeowners in other ways. The generation X group of people also had their own headwinds to deal with. The tech crash of the early 2000s caused a lot of investment losses for people in the stock market. The Nasdaq dropped by more than 50% from 2000 to 2002 and the broader stock market also took a large hit. The job market for previous generations in their 30s was also less favorable in some sense than for millennials today. The unemployment rate in the United States is 4% as of January 2019. But rarely did the rate fall this low in the past. For example, from 1970 to 1997 the U.S. unemployment rate fluctuated between a low of 5% to a high of almost 11%. In fact a 7% unemployment rate was considered pretty normal for the previous generation workforce.

Another advantage that many millennials will have which their predecessors didn’t have is that young adults today are next in line to inherit massive amounts of wealth that has been accumulated by their aging parents and relatives. According to Toronto-based research firm Strategic Insight between 2016 and 2026, the largest wealth transfer in history is expected to take place as older generations pass on their used financial assets to younger generations. As a result, many millennials are likely to “push for things such as increased estate taxes in order to ensure that some of the wealth that is transferred from older generations is redistributed throughout all of society. The idea is being spearheaded in the United States by recently elected Democrat Congresswoman Alexandria Ocasio-Cortez. Ocasio-Cortez who at 29 is also a millennial, is lobbying for the introduction of a tax on the wealthiest Americans in the country. She believes that every dollar of income over $10 million should be taxed at 70 per cent. Whereas the age 65 was once marked by a person’s announcing their retirement, today’s senior citizens are opting to soldier on. The idea of freedom at 55 seems long forgotten.”

Gen Xers and the Boomers group up in different times with different problems. They dealt with war, the energy crisis, and several recessions. Many people see their own generation’s struggles as exceedingly more difficult than other age groups. But in a world that is becoming smaller, we would all need to understand each other to work better together. Gene Marks from the ChicagoTribune explains that “the average age of small business owners in the U.S. is 52, according to the U.S. Census Bureau, and the millennial generation now makes up the largest chunk of the U.S. workforce. Chances are if you own a business, you will need to hire millennials.” The business owners and managers can give millennials training, career advancement, and financial opportunities. And the millennials are what the Gen Xers need to grow their business and attract younger customers. All age groups would benefit by respecting each other’s hardships and understanding where they come from in order for everyone to better meet their needs and feel productive in society.