Since early summer of this year, we’ve seen a big divergence in performance between domestic stocks and emerging markets: 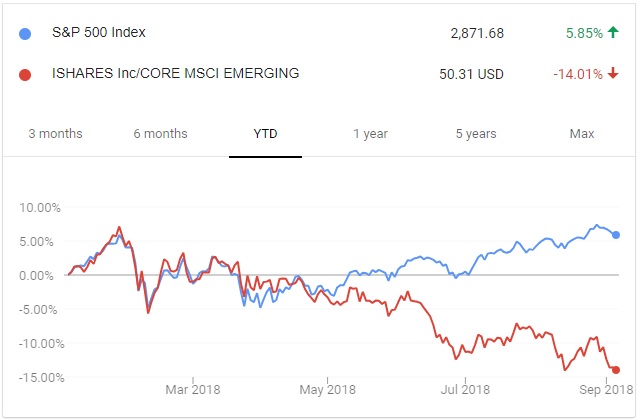 Most of the blame is currently placed on a strong dollar. The U.S. Federal Reserve has been tightening its balance sheet and raising interest rates, which makes the dollar a more desirable currency to hold compared to many alternatives.

A lot of emerging markets countries (both governments and companies therein) have debt in U.S. dollars. They do this because compared to debt in their more volatile local currencies, they can often get lower interest rates if their debt is in USD. However, if the dollar rises considerably compared to their local currency, it raises the value of their debt in terms of their local currency (which is where their revenue is coming from), and can increase the risk of default.

This has slammed Turkey and Argentina the hardest. Both of those countries have very limited foreign reserves, which is the government’s best tool for strengthening their currency relative to other currencies. Turkey has high corporate debt in USD, while Argentina has high government debt in USD. On the other hand, countries like Thailand that have massive foreign reserves and limited debt in USD have held up very well in recent months.

This chart shows, for example, what has happened to Turkish stocks compared to Thai stocks, even though both are classified as emerging markets: 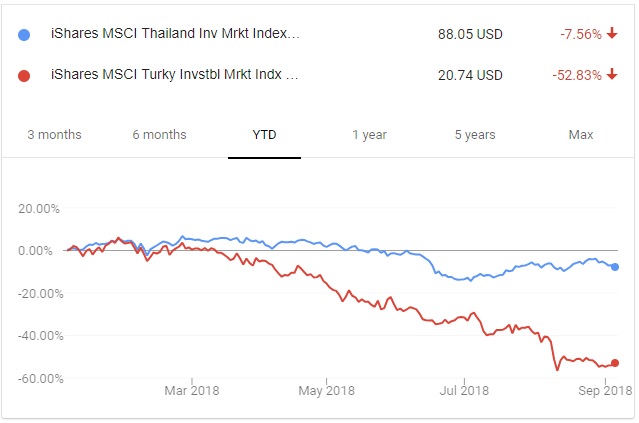 Like Thailand, China also has large foreign reserves and limited external debt, but broad fears about the potential trade war between the United States and China have seriously weighed down Chinese equities. The Trump administration has recently proposed putting tariffs on virtually all Chinese imports. Tariffs on $50 billion are already in place, tariffs on another $200 billion are in preparation, and another $267 billion are proposed as a potential third wave.

Where the Opportunity Is

Quite the contrary, it’s likely a good time for investors to re-balance into emerging markets, to make sure they maintain exposure there. Successful stock investing is about buying good business fundamentals at reasonable prices.

A few small economies like Turkey and Argentina are in real trouble, but the EM powerhouses like China and India have solid fundamentals. Russia, Thailand, South Korea and others are fundamentally solid as well. Brazil is a bit of a mix depending on how upcoming elections turn out.

Chinese exports to the United States are around $500 billion per year, and their nominal GDP is over $12 trillion. U.S. exports, in other words, account for a little over 4% of Chinese GDP. If Chinese exports to the United States get cut in half thanks to tariffs (an unlikely scenario), that’s a 2% reduction to China’s GDP, which is currently growing at over 6% per year.

Realistically the negative effect of that level of export reduction would likely be larger than that due to ripple effects. The arithmetic is not so simple considering all the parts of the supply chain that are involved with exports. Certain industries would suffer more severely than others, and it would definitely be a headwind against economic growth for China. But is it a catastrophe? Likely not in the long run.

As this chart shows, emerging markets are very volatile: 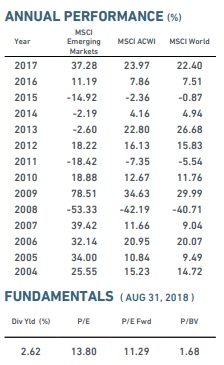 Emerging markets have a 20%+ sell-off every two years on average, and some years are up massively. If you buy the dips when the fundamental valuations are cheap, you can build an ever-larger basket of emerging market exposure at very low prices.

Could EM equities go down even more in the short term? Absolutely. Trade wars, high global debt, currency swings, and all sorts of things can make investors pull money out of emerging market funds.

However, there is a high probability that investors 5 or 10 years from now will look back at 2018 as having been a solid entry point into low-valuation emerging markets.

Disclosure: The author is long IEMG and EWZ as part of a diversified portfolio.