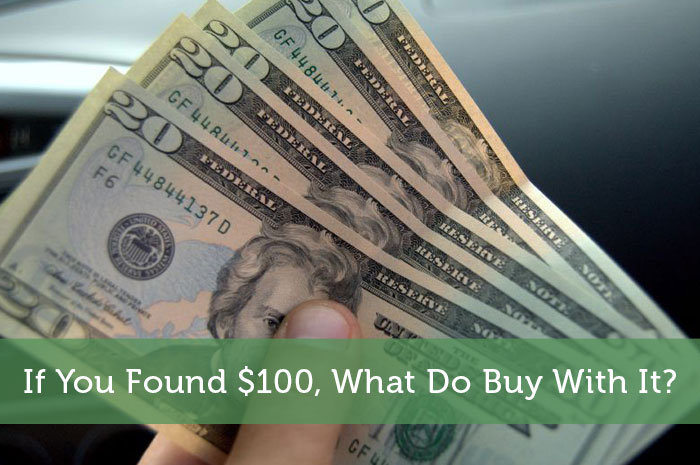 Say you are out walking and you happen to find $100 cash laying on the sidewalk, what would you do with that tax-free present from the heavens? And don’t give me some bs that you would take that money to the police to find the person who lost it, or actually claim it on your taxes.

I was faced with that scenario as a young child about 6 years old. On my way to the local corner store to buy the small amount of candy that I could afford, I noticed a few bills rolled together on the ground. I don’t recall the exact amount, but I think it was about $60. At that point in my life, I’m pretty sure that I had never had any paper money, let alone a full day’s wages at minimum wage.

So obviously I was bursting with excitement. I had hit the jackpot! It’s a wonder that I didn’t take that money into the corner store and buy the biggest bag of candy possible. Somehow I had the sense to bring that money home to ask my mom what to do with it. Thinking back, I think it must’ve been my sister that prevented that massive junk-food binge. Secretly I think she was hoping she might get a cut of the cash.

With that kind of money at that age, there was no way that I was going to put it in a bank and not spend it immediately. My mom realized that with my love for junk-food, she had to present other alternatives that wouldn’t lead to a dentist bill for several cavities. The choice was either buy a nice dinner out for the family or go to the department store and buy some toys.

I’d love to be able to say that I was generous and treated my family, but come on, I was just a kid! And it was my found money damnit! Plus I had a limited amount of basic toys since we weren’t well off. My toys definitely didn’t match up to the kid down the street who I’m pretty sure had the entire Transformers collection. Damn him!

What kid is going to choose a single meal that he won’t really appreciate over a bunch of toys that he can use over and over? Yes, such a kid does exist, but it is a rarity and it is probably mostly kids whose families are already well off financially.

In the end I recklessly spent that cash on a sticky dart gun and some silly electronic robot thing that spun in circles making noises and flashing lights. Ahhh, my first needless splurge.

The dart gun was great until I managed to lose all those saliva-covered darts. Thinking back, that probably wasn’t the most hygienic toy, especially with the dart that you find weeks later inside the couch or beside the fridge. No there’s no time to wash it. I need to shoot that dart at a window or someone as soon as possible.

As for the flashy robot thing, it was a true waste. We had 2 or 3 good days of terrorizing the neighbor’s dog with the robot, but eventually it stopped working. I think my mom said it was broken, but that might’ve just been an excuse to avoid buying more batteries every week. Once it wasn’t spinning in circles causing all kinds of havoc, it just wasn’t the same.

I think the short lives of those toys ended up being a good lesson for a kid. One day I was filthy rich and the next week I was only left with some broken toys collecting dust. Sometimes you just have to make mistakes to gain knowledge. If I had found more money a month later, I’m sure I would’ve repeated the cycle. Many years later though, that memory is vivid and makes me appreciate money more.

If the same situation played out again at my current age of 31, I’d be stoked initially, but the money would just go into my wallet with no urge to suddenly spend it. It would likely just go towards smaller purchases on which I don’t bother using my cash back credit card. Or I might just deposit it at the bank. The find alone would be enough gratification and I wouldn’t feel the need to further reward myself.

Have you personally found cash before and had to decide what to do with it? What did you buy? Would you do the same today?

If you have never found any significant cash, what would you do if it did happen?