How the Future Will Dramatically Change Your Retirement 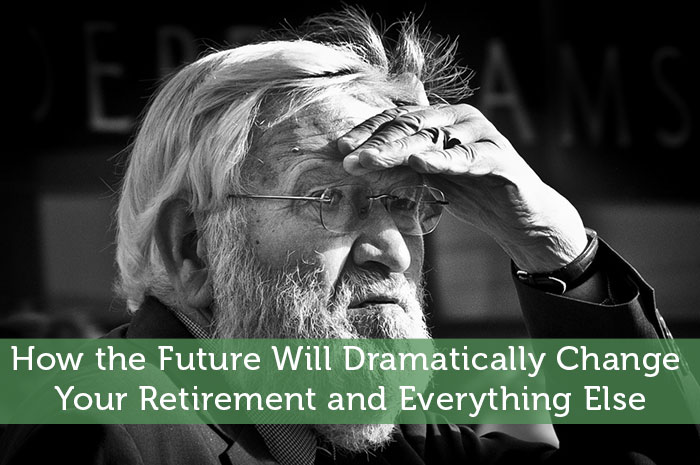 500 years ago it took a century for significant change to occur. Today, meaningful change can occur in months. It will be our ability to grasp these changes that will radically affect our lives for better or worse. I think very few people recognize and even fewer are preparing for the changes that are coming. Yet, it’s not because they aren’t capable. It’s simply the human nature that exists in all of us to resist change, for it represents the unknown.

Among other things my father was a Futurist . A futurist is someone who attempts to systematically predict the future. They do this by analyzing how certain trends will affect society years into the future. Ray Kurzweilis probably the most well known living futurist and inventor. None of us know with certainty what the world will look like in 2030, yet we should expect things to be radically different, for things change today and an alarming pace. Hence, we either learn to adapt to change or we run the risk of getting left behind.

Insanity or To Be Expected?

Again, this is one of the biggest obstacles most of us face: doggedly wanting things to remain the same, so that we can once and for all figure them out. Ever wonder whywe’re driven like this and why we have such a hard time accepting change? In my best estimation that goes with my own research, it goes something like this. It’s pretty well known that your body’s #1 objective is survival (keeping us alive). It performs an amazing number of functions that we aren’t even conscious of. Now combine this with the everyday stress of life in the 21st century; the 1 touch, media blitzing, one crisis after the other, world we live in and we still can’t begin to realize the amount of stress we put ourselves under. So, in an effort to bring this confusion under our control, we seek predictable events in an unpredictable world. Simply put, we’re seeking something that does not exist.

Growing Up Around Chaos

A skill my father was born with and one I’ve had to learn is that of Thriving on Chaos. Some years later when I look back on his life, it makes sense to me now why one of his favorite authors was Tom Peters who wrote one of the most popular business books Thriving On Chaos. The theme is How To Thrive in an atmosphere on unceasing change. My father created chaos in his world, not because he wanted a crazy atmosphere but because he felt engaged and natural there.

Examples Of Change We Know All Too Well

Here are some examples of change that have occurred and that are underway in the world we live in.

On the verge of the 2000 Tech Wreck, analysts were convinced incubator tech companies would be around forever. When these analysts were asked to give their rational on just how a company with no sales and an enormous market cap, they rationalized these incubator companies having a $trillion market cap (#of shares outsstanding x stock price)  Viewing a graph of the Semi-conductor index known as the SOX (an index where many tech companies trade) shows what happened in 2000.

At the end of 2010, we were conditioned to believe that rising housing prices were a given for one’s life. I can remember selling the last home I owned in 2006 and being told I’d regret it. I can remember the madness in the mortgage backed securities market. The real give away in seeing the housing bubble coming to an end, was in researching the products that were being created back then (between 2003-7) and coming to the conclusion they had no mathematical chance of ever performing. How so? If you took the average home, there was a debt multiple (overall debt including derivatives) of 3-5. You didn’t just have mortgages, you had all of the other performance contracts tied to the mortgages (derivatives). Hey, want to pay for your house 3 times over?  As the following chart shows, the housing collapse was as natural as gravity; trying to stop it is like trying to prevent nature’s course.

Today, we have the precious metals markets that are absolutely misunderstood and thus shunned by almost anyone. There is no question as to why gold and silver is doing what it’s doing. Mention that gold is “going to” come back into the monetary system or that you’re investing in gold and you’ll be labeled a radical (as I have been).  Yet, the “going to” has already happened. Yet most people compare what is happening in the gold market today with what happened in housing in 2010 or the Dot Com Bubble in 2000.  Yet, less than 1-2% of the retail (public) owns gold or silver. Making cause and effect assumptions within the investment arena can cost an investor greatly.

It is just that we’re conditioned to the status quo, that we look to any and all evidence to stick with what has become comfortable. Then, when what was once unthinkable becomes obvious we question: “How could I not have seen it?” You most likely did but dismissed it. And again, it is all relative to our natural desire to seek out order and reason in our worlds.

Getting Used To Being Different

At heart, I’m a contrarian investor. The weirdest thing was and still is learning how to get comfortable going against the crowd and then knowing when to admit to yourself you’re just dead wrong.  Learning not to get married to investment themes is good advice.

Just like a single fish traveling in a school, the crowd does what everyone else around him does. He looks over his shoulder to make sure he isn’t out of line. Introduce change into the ebb and flow (what everyone is comfortable with) and you’re going to be labeled “one of those” an outcast. Well, I’ve found my greatest success being one of those and not because I want to be different. It’s because I am overly anxious about what happens next. What is possible and where do we go from here, right now?

How Will The Future Affect You?

So, how does this affect you? Well, one thing is for sure, in my opinion. You should take almost everything you’ve learned about aging, retirement and the possibilities for what what your life will or could look like in 25 years and question those assumptions. For example, retirement at age 65 is a concept that will fade away. Not because it is wrong but because the concept was hatched decades ago during the New Deal, when people were living to 67. Today, you can start a new career at 65.

Ask yourself the following question: What kind of false belief systems or static thinking am I holding onto that is keeping me back? Don’t limit your future by the stale or static thinking. Challenge your assumptions for until you do, you won’t reach your potential and brace for the future.