How Hard Will It Be to Repay Your Loans Based on Your Major? 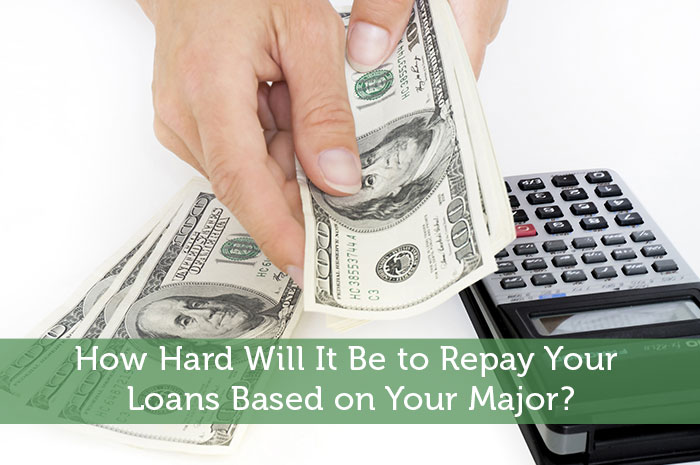 If you’re majoring in Psychology, you’re likely aware that you will be making less once you graduate than someone who majored in Computer Science. But you might not be aware of how much more difficult it will be for you to repay your student loans than it will be for that Computer Science graduate. Thankfully, The Hamilton Project has created the Undergraduate Student Loan Calculator to help students understand how difficult it will be for them to repay their student loans based on their majors.

This calculator is an important tool that helps students visualize how their likely future income impacts the level of difficulty involved in repaying their loans. This information will hopefully help students choose majors that will provide a better return on investment or encourage them to incur less student loan debt.

In this article, we use an average student loan debt of $35,000 for each student and look at a number of different majors to see how easy or difficult it will be for graduates with those majors to repay their student loans.

We also assume that students have 10 year repayment plans and are paying the current federal student loan interest rate of 3.76% on their loans.

Given these numbers, Fine Arts majors would likely not be able to pay back their loans in 10 years or would have to sign up for income based repayment plans or longer repayment terms.

Engineering majors don’t have any significant difficulties repaying their student loans according to the calculator. In their first year of repayment, they must pay 10.2% of their salary towards their student loans but after that the percentage ranges from 8.5% to 6%.

Students who graduate with English majors face extreme difficulty repaying their loans during the first six years, moderate difficulty during the next three years and an easy time repaying their loans in the final year. In the first six years, the percentage of their income that they pay towards their loans varies between 22.6% and 12.5%. In the next three years, this percentage varies between 11.8% and 10.4%, and in the final year they pay 9.6% of their income towards their loans.

Is Your Major Not Here?

If your major isn’t here, you can go find out information about how hard it will be for you to repay your loans using The Hamilton Project’s Undergraduate Student Loan Calculator. You can input your major and the details specific to your student loans to see how large a percentage of your future income you might be paying towards your student loans. Just be careful since while The Hamilton Project suggests that paying 10% of your salary towards your loans is ‘easy,’ other experts recommend you limit it to just 8%.

1 thought on “How Hard Will It Be to Repay Your Loans Based on Your Major?”