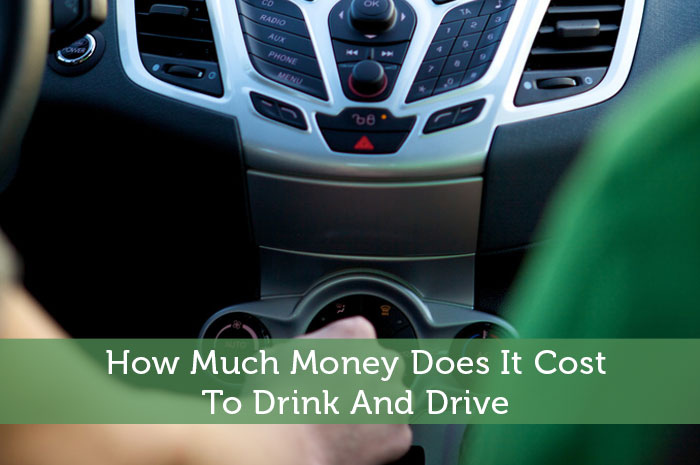 Hey everyone, I’m Josh and, thanks for joining me for this week’s Monday Money. Generally, in this column, we talk about things like budgeting, investing, etc… However, today I was inspired to write about something else, the financial burden and consequences associated with an operating while intoxicated conviction. The reason I decided to write about this is one of my friends was caught driving along the road while under the influence. I might add that his friends being myself and many more were with him that night and offered to drive him home. Unfortunately he declined all offers. Now, he’s got a lot of complaints about the cost of his decision!

First off, I want to let you all know that this is no plea to reduce the cost of an OWI, DUI, or DWI charge. By nature, these charges stem from reckless actions that could cause danger to the operator as well as innocent consumers around him or her. That being said, this is more of a way for me to say, “Hey, don’t do that!” and explain why from a financial standpoint.

Originally, I attempted to get in touch with my buddy’s attorney for an interview. I figured, who would be better to explain the cost of a conviction like this than someone who works in the field? Unfortunately, his attorney declined to comment. No worries, I was able to contact another attorney that was willing to chat. His name is John Dobogai and he is an OWI attorney who practices in Wisconsin. Here’s what I learned while I spoke with him.

As with any charge, those who are charged with an OWI, a DUI, or a DWI, are going to want to seek the assistance of an attorney. So, my first question to attorney Dobogai was, “How much money can someone expect to pay a defense attorney for their services with a charge like this?”
Attorney Dobogai said, “Every attorney will decide how much money they want to charge as a retainer fee”, a fee that can vary pretty wildly. He went on to say, “Most attorneys charge a flat fee for certain things.” Of course, I had to ask the question, “Is operating while intoxicated one of those things?” He answered “Yes!”

“So, what’s the average flat fee a legal attorney will charge?” you ask. Attorney Dobogai said that when it comes to OWI, DUI, and DWI charges, “Most attorneys will charge a flat fee that ranges between $500 and $10,000” for the defense. He also added that “Some lawyers charge an hourly rate instead.” He explained that on some cases that take too long, flat fees would leave the attorney underpaid for the work that needs to be done. In some cases that are open and shut, and don’t take much time, consumers can find themselves overpaying for the defense in the case of a flat fee. He also added that the “average cost is around $1,000.00”.

Now we know what fees attorneys will charge for defense in these cases, what about penalties associated with a conviction? So of course, I asked that question. In his response, attorney Dobogai stated that we would need to discuss only first offences today. This is because we would have been on the phone for hours discussing what happens on recurring offences. None the less, he stated that a first time offender in his state, Wisconsin “Would pay a forfeiture of somewhere between $600 and $900.” He went on to explain that when we think of penalties associated with crimes, we call them fines. However, because in his state, OWI isn’t necessarily a crime, the word fine is replaced with the word forfeiture which means about the same thing.

At this point, I was thinking, “Well, why is my buddy complaining so much that’s not a lot of money!” Then attorney Dobogai went on to explain more penalties. After the fine, those convicted will need to take part in a “mandatory alcohol assessment and driver safety plan”. Attorney Dobogai explained that “The assessment costs between $200 and $260”. He stated that “The driver safety plan costs a couple hundred dollars if they go to technical college”. The driver safety plan classes usually consist of 5, 3 hour sessions. He said that if those convicted of OWI decide not to go to a technical college for the classes, “they can go to individual counseling and the cost on that depends on the agreement with their insurance [provider]”.

I figured, this had to be about it, but was wrong again. Mr. Dobogai went on to explain that those who are convicted “will also have to pay a $50 application fee for an occupational driver’s licence as well as a $200 application fee to reinstate their licence” once the suspension has expired.

There’s more too! If the court judge decides that the blood alcohol content is “higher than .15% or if there was a refusal to consent to chemical testing under the implied consent law, they have to have an ignition interlock device installed for 1 full year on first offence.” This device also known as an IID is installed into the vehicle and before the ignition will start, they must take a BAC test. The car will not move if the BAC is too high. He went on to explain that the “IID costs between $70 and $80 per month.” However, if something goes wrong with the device, “the driver will be responsible for maintenance expenses associated with the IID.”

Finally, those who are convicted will also need “to get SR-22 insurance for the term of the occupational licence.” SR-22 insurance is a form of high risk insurance that is required by law to be carried by drivers with history of reckless driving activity. This insurance can often times be double what consumers are already paying and more.

So, let’s tally this all up. Before we get to the total cost, to be fair, there are many different figures that vary wildly depending on what happens. For instance, your assessment could cost $200 or $260. So, I’m using averages based on the two extremes for any figures we don’t have exacts for. So, let’s break it all down…

We all know that drinking and driving is a bad idea. It’s a dumb mistake that could cause you to commit a criminal offence. Drunk driving could kill the driver or worse, kill innocent people around them! That in and of itself is enough to make most drivers think twice before drinking and driving. However, if that’s not enough for you, think of the $4,280.00 average price tag associated with such actions. That’s a huge financial burden that can cost you years of your savings!

Have you ever considered driving after a few drinks? Would you have even considered it if you knew the total cost of getting caught? Please provide your answer in the comments below!

Special Thanks: I really want to give a special thanks to attorney John Dobogai for spending the time with me on this article about the cost to drink and drive. We talked for a good amount of time. If he was paid for that time, I’d be broke. It was hard to find an attorney that was willing to sit with me and answer these questions in detail. So hard in fact that I thought I was going to have to change the topic for this week. But, attorney Dobogai came to the rescue! That being said, thanks John, I really appreciate it!

Filed Under: Monday Money Tagged With: drinking and driving

Joshua Rodriguez is the owner and founder of CNA Finance and Alpha Stock News. His experience in market analysis is vast, earning him positions as a contributor to top websites like Equities.com, Benzinga, and several others. When he's not working, Josh enjoys time with his wife, 3 year old daughter, 8 year old son, and five large-breed dogs who tend to keep his schedule booked. To get in touch with Joshua, contact him on Twitter or email him at CNAFinanceHelp@gmail.com.