How to Stay Calm in the Financial Storm 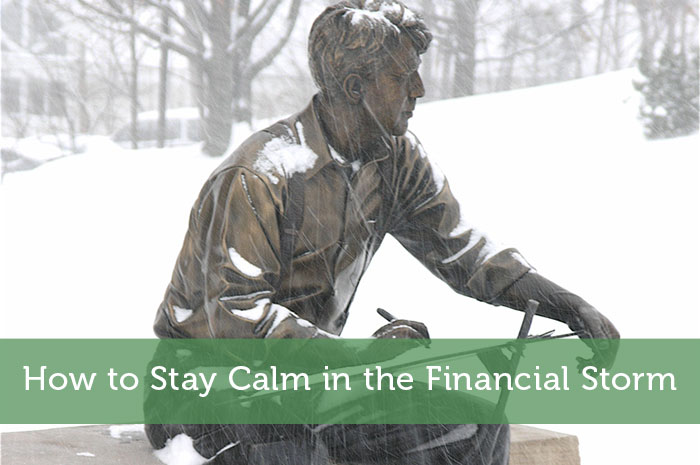 This year hasn’t delivered us a ton of good news so far via the markets. Stock Markets are down. China is down. Oil is down.

Not the exactly the start to 2009 we were hoping for. Wait 2009? It’s 2016… to be fair 2009 started the same way (not that I’m saying this is the same situation as 2009). Of course, we were in the middle of the biggest financial crisis since the great depression and yadi yadi yada… you know that whole story, I won’t bore you with it again…

The point is we have been here before. Lots and lots of times.  1987, 1989, Dotcom mania, China crisis, Gulf war crisis, Subprime crisis, you name it…

While it can be hard to watch your portfolio shrink on a daily basis here are a few tips to help you weather the financial storm we find ourselves in at the moment.

Stop watching the talking heads on the news

For the love of Buffett, turn off the 24 hour news!

Here’s the deal: the news stations have to report on something.

It’s not enough for them to say: “Nothing has happened and we don’t know when things will change, but keep watching in case something happens.”

They need to keep you engaged and on the edge of your seat. Fear is how they do that. So they go over and over the same thing until you start to buy into the fear, and then keep watching.

This isn’t a big surprise: Bad news gets more eyeballs. Fear attracts better than happiness in the news world. Think… when was the last time you saw a car wreck on the side of the road and didn’t look? Exactly!

There is no need to stay glued to the news channels hoping for that extra tidbit of information that may salvage your sinking stocks.

Put on a cartoon, have a laugh, go outside. If you have been watching the news long enough, you probably need it.

Remember: This is just what normal markets do

This is normal. Every market correction is the same.

In the beginning cash has to go somewhere, so it goes into stocks, such as Motley Fool stock. As more money comes in, stocks go up. Investors start making more and more money, and everyone wants in on the “gravy train”.

This leads people to get more comfortable with stocks and risk.

Then greed kicks in, and we think the market can never go down.

So people start to use more and more leverage. More money comes into the market and pushes stocks to higher valuations like we have so recently seen.

Then the plug comes out of the markets and everyone gets out at once. Pushing valuations back down. Eventually all the weak hands will come out of the market and the buying will start again. Soon people will be sitting on a bunch of cash again, needing to deploy it somewhere.

When that is no one knows, don’t be fooled by anyone who tells you otherwise.

Tip: It’s called a market cycle for a reason; just realize where you are in the cycle

You have one right? Pull it out and look at it. Read it over.

Did you buy XYZ stock because of the long-term prospective of the company? If so, has that changed in the last few months? Probably not.  When you keep the long-term in mind, these kinds of fluctuations/corrections will bother you less.

Several of the stocks I have bought in the past year have had their gains wiped out. Do I care? A little, I don’t think I’d be human if it didn’t bother me a little.

But that’s when I look at my plan and think 10 years out from now. People are still going to need gas, electricity and a bunch of other things that I own. It’s not about always being right immediately, it’s about staying in the game long enough to be right.

Tip: If you don’t have a sheet to write down your stock plan, you can get mine at the link in my bio.

There are deals out there to be found

I’m starting to see a lot of fear out there right now.

If you are focusing on losses you are missing out, because that means you are not thinking about the opportunities that are in front of you.

Don’t be a victim, get out there and look for the deals. Valuations are starting to look really good in some sectors. If you can muster up any gumption, it may be time to start looking for those deals.

It’s not like taking candy from a baby just yet. Still, some companies are looking pretty darn good right now. I’m not saying its time to get back in. Trying to catch a falling knife is a good way to earn the nickname “Stumpy”. You have to decide when the time is right for you.

If you do buy as we go down, make sure you can handle it mentally. In every sell-off there is value getting thrown out the window. A kind of  a “baby thrown out with the bath water” if you will. As long-term investors this is what we wait for, sometimes for years.

Look, I don’t mean to belittle the situation. Watching your portfolio shrink can be tough. However, in times like these I turn to others that made their big money in other depressed stock valued times and think: “What would they be doing right now?”

Here’s a quote that sticks in my head and keeps me going.

“Someone’s sitting in the shade today because someone planted a tree a long time ago.”

As for me I’m going to get out there and start planting some seeds.

Andrew Daniels is founder of FamilyMoneyPlan.com, where he blogs about their financial journey from how they have climbed out of their $340K debt and are building wealth towards the goal of attaining financial freedom. To connect with him on Twitter @FamilyMoneyPlan or Facebook

5 thoughts on “How to Stay Calm in the Financial Storm”