What Investing Lessons Can We Learn from the Republican Presidential Race? 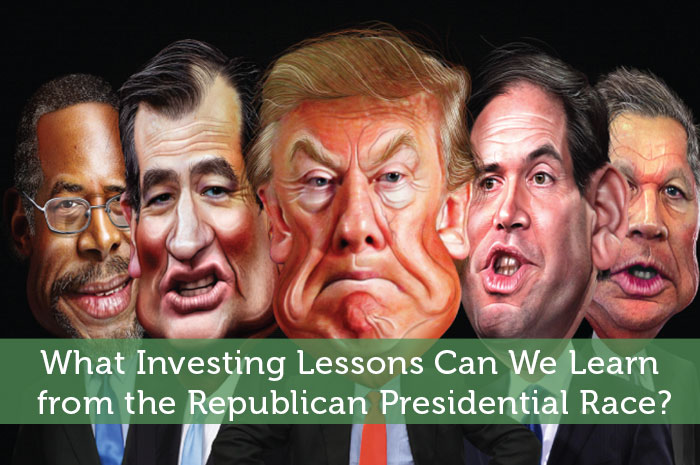 Aside from the obvious golden rule lesson of treating others as you’d have them treat you, there’s one big lesson that we all can learn from the Republican presidential race. That lesson is to know when to throw in your hand and get out of an investment. Most of the Republican contenders stayed in the race way too long and way past the point of being able to minimize their investment losses. This is because they were emotionally invested in winning. Getting emotionally attached to an investment is a huge mistake, it makes you defy all rational thinking and that’s exactly what has happened to these Presidential wannabes. Once you get emotionally invested you start ignoring the red flags that it’s time to jump ship on your investment and cut your losses. You start believing that your luck is going to turn around at any moment even though all of the logical numbers tell you otherwise.

Now couple this emotional investment with the built it loss aversion that most humans have which make us naturally double down on our bad bets and you have a recipe for disaster. Yes we could blame all of this on ego and write it off as the Presidential wannabes having too big of an ego to drop out and we could tell ourselves that we don’t have egos like them so we would know when to get out of an investment but it’s more than just ego.

Studies by Nobel prize winner Daniel Kahneman have shown that loss aversion is prominent in most humans. We all hate to lose money more than we enjoy making money and this causes us to keep “throwing bad money after good money”. When our investments go south we feel that we have to dig ourselves out of the hole and at least break even so we invest more money in the bad investment. This flawed strategy causes us to hold on to the bad investment for a longer period of time and lose even more money. Very rarely does the investment make a turnaround and become a good investment.

When I first started investing I made the loss aversion mistake with Transocean Ltd. (RIG) stock. Before I bought the stock I did all of my research and came to the conclusion that Transocean was a great stock to own. It was the industry leader in offshore contract drilling and the stock had room to grow. But low and behold I was wrong. From the day I bought the stock it started on a slow decline. There was no obvious reason for the decline. All of the numbers I researched looked great and all of the analyst’s opinions I read said the stock was a buy so I told myself the decline is temporary and soon it will go back up and I doubled down on my investment. Then the BP p.l.c. (BP) oil spill travesty happened and that slow decline turned into a fast decline. But I still refused to let go, making excuse after excuse for why I should hold on to it, and I convinced myself that since it had dropped so low that it was a great time to lower my average cost basis and invest more money into the stock so I could have an even larger potential gain when the stock rebounded. That was a very costly decision. When I bought the stock it was probably around $80 and today it’s around $12. Now I wised up and got out of it years ago but imagine just how costly it would have been if I kept lying to myself and holding on to it.

As an investor it is important to avoid getting emotionally attached to your investment. And it’s even more important to go into each investment with an exit strategy plan if the investment doesn’t go as planned. I know it might sting a little to take that huge loss but it’s always better to take small losses early than big losses later. If you’re having a real hard time cutting losses try using stop loss strategies or limit orders to automate your loss taking. Don’t make the same mistake most of these Republican presidential contenders have made sticking with a bad investment for too long.

Author Bio: Jerry D Mitchell II is the owner, CEO, and Principal Financial Advisor of Incite Wealth Management LLC, a fee only registered investment advisory firm in Orlando, FL. Jerry’s passion is closing the wealth gap by increasing the financial literacy of young professionals and underserved minorities. To connect with Jerry you can follow him on Twitter @The_iAdvisor.