Investment Lessons from The Big Short 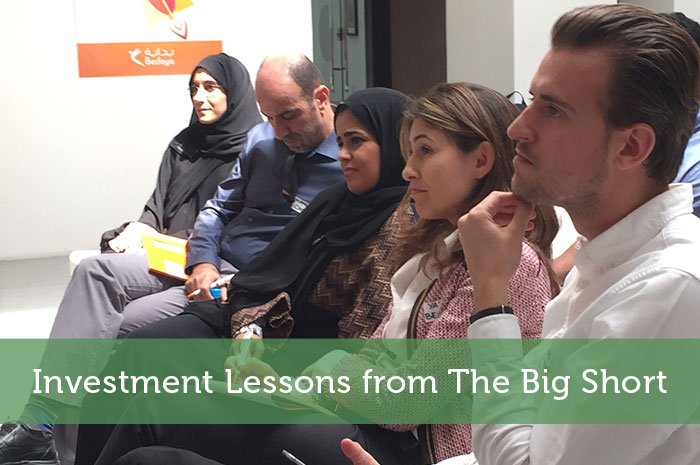 The Big Short is a recently released movie about several outsiders in the world of high-finance who predicted the credit and housing bubble collapse of 2007. They decided to take on the big banks for their greed and lack of foresight and each character who shorted the market made a fortune doing so. The film is adapted from a book written by Michael Lewis, who has spent time working on Wall St. in the 1980s.

The movie is very entertaining and educational at the same time because it is directed by Adam McKay in a docu-drama style where the actors would sometimes break the fourth wall and speak directly to the audience. The Big Short makes a valiant effort to capture some of the more outlandish high finance personas: The socially awkward genius, Michael Burry (played by Christian Bale); the cranky investment banker Mark Baum (Steve Carell); the young wanna-be big short, Jared Vennett (Ryan Gosling); and the recovering ex-financier, Ben Rickert (Brad Pitt).

The movie starts with Michael Burry who decides to look into the mortgage backed securities peddled by major banks and discovered that many of the individual loans in the funds were toxic. He calculated that an 8% default rate would make the entire security worthless. Later in the movie Jared Vannett used Jenga blocks to explain how fragile and risky the entire mortgage system is really in. Only a handful of characters in the movie realized the inevitable fall of real estate which would be caused by sub-prime loans and took action to bet against the housing market. Just about everyone ridiculed Burry and Vannett for shorting U.S. real estate. But by the end of the movie the people who shorted the market all became independently wealthy. The film also exposes the lack of accountability on the credit rating agencies. Normally Standard & Poor’s and Moody’s are suppose to rate securities based on market risk, but the movie shows that even though subprime mortgage bonds were clearly at a high risk of default, they were still given AAA ratings by Moody’s. This is because if Moody’s didn’t give the bonds a high rating, the banks would go a competitor to get rated instead and Moody’s would lose out on the business. This is a blatant conflict of interest where the rating agencies who rate products from banks, are being paid for the very same banks.

The best aspect of the film is how it describes the causes that lead up to the great recession in a way that is very understandable for the layman. It explains terms such as credit default swaps and collateralized debt obligations, and shows the audience how these financial instruments played important roles in triggering the financial crisis.  One lesson we can learn from the movie is that people tend to see what they’re incentivized to see. According to the movie mortgage brokers earn $2,000 for a fixed rate mortgage deal, but they make $10,000 if they land a sub-prime variable rate loan. This is because the banks can potentially make more money from the latter. If people are paid to not see the risks, then they will not see them. Another lesson from the movie is that a lot of money can be made not only in bull markets, but also in market corrections.

In real life, Michael Burry personally earned a profit of $100 million and made more than $700 million for his investors. His investment firm ultimately recorded returns of 489% net of fees and expenses between its inception in 2000 and its closing in 2008. As a comparison, the S&P 500 returned about 2% over the same period. The sub-prime housing and financial crisis of 2007 and 2008 wiped out $5 trillion of savings and pensions. In the U.S. alone 8 million lost their jobs. It’s an important historical event and The Big Short does a great job of explaining how it happened.

2 thoughts on “Investment Lessons from The Big Short”