What Lies Ahead for Real Estate Crowdfunding in 2016 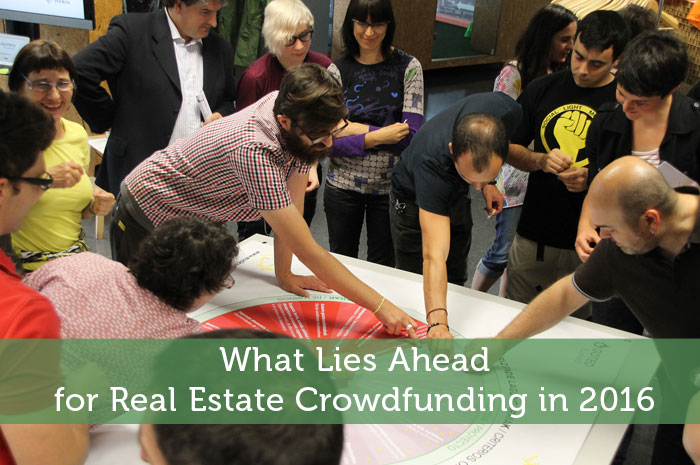 In the three years since the passage of the 2012 Jumpstart Our Business Startups Act, crowdfunding has become a force to be reckoned with in the investing arena. Though relatively new, the real estate crowdfunding sector, in particular, has experienced tremendous growth in a fairly brief period of time.

By year’s end, it’s projected to hit the $2.5 billion mark, according to Massolution’s 2015 Crowdfunding Report and growth features heavily in the outlook for 2016. Learn and read about where real estate crowdfunding has been and where it’s headed in the new year.

The industry continued to expand but the SEC’s rules limited participation to investors with a net worth in excess of $1 million or an annual income of $200,000 or more ($300,000 if married).

With the SEC issuing its final approval of Title III rules for crowdfunding at the end of October, the doors to the real estate market have been opened for non-accredited investors as well. Implementation of the updated guidelines is expected sometime in early 2016, opening up an entirely new asset class for millions of investors who were previously shut out of the real estate market.

Why It’s Taken Off

There’s no denying that real estate crowdfunding has become immensely popular among investors. Over the last year, the industry has expanded by more than 150 percent, according to Massolution, and it represents the fastest-growing segment of the crowdfunding market as a whole.

So what accounts for this rapid growth? The secret lies in three specific factors: accessibility, affordability, and transparency. This combination has allowed real estate crowdfunding to remove certain barriers to real estate investing that have previously dominated the market in more ways than one.

Prior to the JOBS Act, gaining access to a private real estate investment meant investing $50,000 to $100,000 or more. That high threshold effectively locked out a large number of investors who were either unable or unwilling to invest such a substantial amount of cash into a single property. Real estate crowdfunding platforms have made it possible for investors to gain access to those same kinds of investments without paying such a high premium.

In terms of transparency, real estate crowdfunding allows investors additional insight that they may not get with other investment vehicles. If, for example, you’re considering a REIT, you may not be able to access a complete profile of each property that’s included. With some companies, properties are thoroughly reviewed and investors are given a detailed snapshot to guide their investment decisions.

Where Will Real Estate Crowdfunding Go in 2016?

As we move into 2016, the push towards real estate crowdfunding shows no signs of slowing down. Here are three key predictions for the coming year:

With the Title III changes taking effect and real estate crowdfunding becoming available to a larger pool of investors, the industry’s growth is projected to accelerate at an exponential rate. Two specific trends, in particular, are likely to gather steam in the coming year.

The first centers on global crowdfunding opportunities. The majority of crowdfunding platforms feature investments in U.S. cities but there a handful of companies that are branching out to make international properties available to investors. As the demand for properties grows, the move towards expansion on a global scale is to be expected.

The second trend involves a shift in the demographic composition of the crowdfunding investor pool. A July 2015 report from DealIndex suggests that tech-savvy millennials are 10 times more likely to venture into the crowdfunding arena compared to their Baby Boomer counterparts. For some of them, crowdfunding may represent a much-needed entry point into the real estate market.

The venture capital market has been a mainstay among investors whose interests lie in providing seed money to start-ups. According to the National Venture Capital Association, venture capital investing topped $48 billion in 2014, hitting its highest peak in a decade.

While that’s certainly impressive, crowdfunding is set to give the VC industry a run for its money going forward. A 2013 World Bank report predicted that the total crowdfunding market would hit $90 billion by the year 2020. When you consider that the industry is roughly doubling in size each year, it’s possible that it could pass that mark well ahead of the 2020 deadline, leaving venture capital funding in the dust in the process.

Since the implementation of the JOBS Act, dozens of real estate crowdfunding platforms have cropped up in the U.S. According to Massolution, there are approximately 85 platforms actively offering investments and that number may break 100 before the end of 2015.

With the game opening up to non-accredited investors, it’s a foregone conclusion that new contenders will join the fray to compete for investors’ business. Which of these new firms will become dominant players in the market remains to be seen but it’s inevitable that certain platforms will rise to the top. We can also expect both new and existing platforms to ramp up fundraising efforts in order to stay competitive.

The Takeaway for Investors

As the real estate crowdfunding industry continues to evolve, investors will be faced with an ever-expanding menu of investments with high returns to choose from. As the competition heats up between up-and-coming and established platforms, there will be an increased sense of urgency to provide the most transparent and cost-effective investments possible, with investors benefiting.

We don’t have a crystal ball but overall, the future of real estate crowdfunding looks exceptionally bright for 2016. The bottom line? Savvy investors who have an eye on getting into the real estate market may want to take a closer look at where crowdfunding fits into their long-term plans.

Author Bio: Nav Athwal is the Founder and CEO of RealtyShares, a curated online marketplace for real estate investing. His platform connects individual and institutional investors to private U.S. real estate investments, raising $300 million across more than 550 deals in 35 states. Prior to founding RealtyShares, Nav was a real estate and land use attorney in San Francisco, representing developers, fund managers, nonprofits and public and private REIT’s on some of the largest US real estate and renewable energy projects. Nav holds a B.S. in Electrical Engineering from UC Davis and a J.D. from UC Berkeley Law School where he was Class Valedictorian.