Millennials Are Buying up Real Estate – Here’s Why

Home prices in the United States and across many other parts of the world have been growing at a reasonable pace for the past five years. One contributor to this trend comes from the demand of young adults. HSBC (NYSE:HSBC) bank commissioned polling firm Kantar TNS to survey roughly 9,000 people in 9 different countries: Canada, Australia, China, France, Malaysia, Mexico, the UAE, the U.K., and the U.S. The survey includes some interesting results about the housing market, particularly among individuals between ages 18 and 35, which is the range HSBC defines as a millennial. The poll was conducted in October and November of 2016. According to the survey, parents are playing an important role in getting their millennial adult children into the housing market. More than a third of millennials surveyed, or 37%, said they had financial aid from the bank of mom and dad to cover their housing costs. Furthermore, 21% of them received help from their parents when it came to paying for other costs after they had purchased homes.

In at least one country surveyed, a little more than one-third of the millennial population already own their own homes. And out of the remaining ones who don’t, 82% say they intend to buy a home within the next five years. Young adults are willing to make concessions around other parts of their lives in order to become homeowners. Below are some sacrifices that a millennial would consider in order to buy a property. 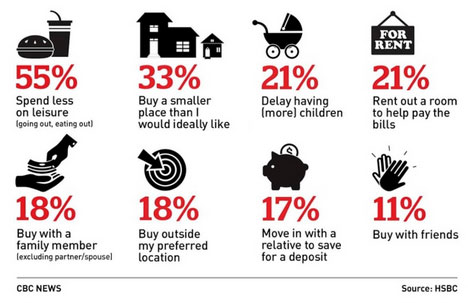 After taking into account all the variables in context, it’s easy to understand why real estate continues to increase in value. In order for there to be a housing correction, something has to change and we simply haven’t seen any major disruptive force in the market yet. That doesn’t mean prices will go up forever. But at least for now, real estate still seems to be a good long-term investment as long as it’s in the right location. The population in the United States is growing. But they are not making any more new land.