Passive Saving as an Alternative to Frugality 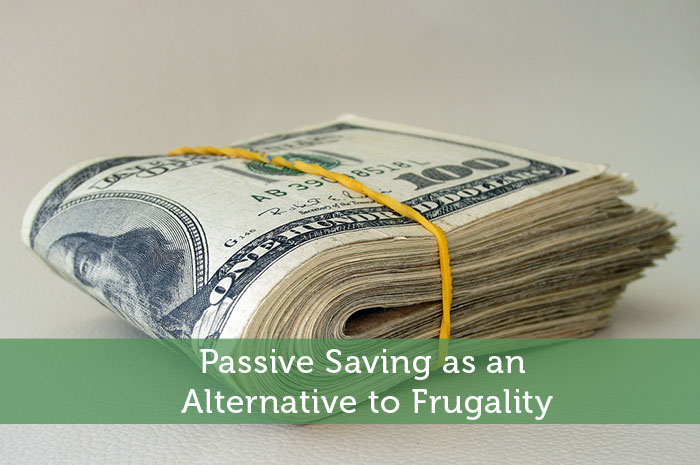 In the personal finance blogosphere, you see a lot about frugality. Frugal living is essential for many people to achieve financial stability, but it’s not something I talk about very much. That’s because it is possible for most people to achieve a balanced budget without having to live like an ascetic. That’s why I tend to advocate saving and earning opportunities which you can set in motion, but which continue on their own without your effort. This is the heart of passive income strategies like owning a rental property (or creating writing on the internet which gets many views over months and years, for that matter).

I’ve written about passive earning opportunities elsewhere, so we’re going to talk about passive savings opportunities today. Passive saving is different than frugality. Frugality is about self-control, making hard decisions about (not) spending over and over all the time. This sort of saving is difficult for most people to sustain, in the same way that going to the gym every day is something most people can’t seem to make happen. Frugality is the marathon approach to saving money and creating a sustainable lifestyle. I have nothing against marathon runners, but it’s not the sort of person I am. I’m a sprinter, and that’s where passive saving happens.

Most people spend more money they have to for many things in their life. Simply by taking an hour or two to figure out how to save money in this area every time you do it, you can save thousands of dollars every year. Don’t believe me? Here are some ways I’ve done it myself.

In all of these cases, the only action you have to take is one focused effort. The savings keep rolling in for months thereafter. This is the passive savings method. There’s still a great argument to be made for a general mindset of frugality, but if you are missing out on opportunities like this, you are leaving money on the table and wasting your own time.

3 thoughts on “Passive Saving as an Alternative to Frugality”