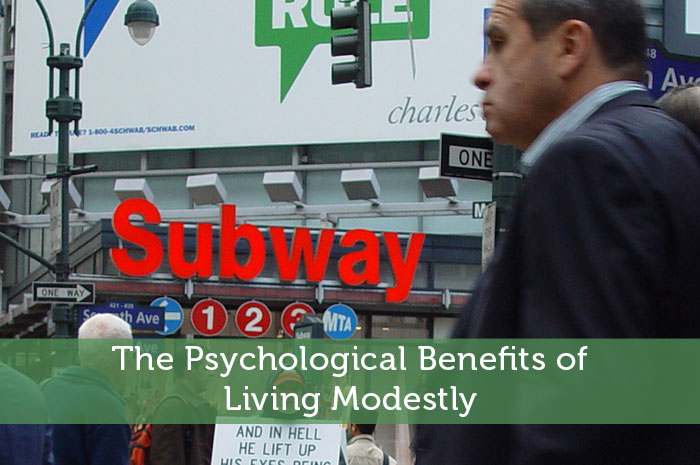 Rick who blogs at Invest In 2012 is honored to be featured here as a guest blogger!

As media has shown us, the rich don’t necessarily live happier than the poor. I like to think of it like this. “Someone who’s rich might not live happily, but someone who’s poor definitely won’t live happily.” Hence, it is wise to live an in between, modest lifestyle; neither as an ascetic nor a materialistic person. Besides the obvious monetary benefits of living modestly (saving money), there are numerous psychological benefits. Let me draw upon my personal experience.

I have an aunt who lives like a king (or a queen, rather). She and her husband live in this really big house with a ton of antiques, and every time they go out to dinner, she puts on her thousand dollar fur coat and all that expensive stuff. Every time I visit her in her house, I have to tip-toe around, carefully not trying to step on anything or accidentally breaking an antique. Which is why I don’t enjoy my visits to her.

And while she may live like a queen, she’s not happy at all. Her career ended in a failure (her husband brings in the vast amounts of money to support their lifestyle), and now she wanders around with nothing to do other than spend thousands of dollars on celebrity perfume. Sometimes, I think that with the amount of money she’s spent on perfume, she could buy another house or two!

My point is, the rich don’t live happily because often times, money can become a restraint.

A lot of rich people constantly stress about their financial situation, all the while spending like there’s no tomorrow. If you’re making $500,000 this year and spend $400,000, you’d better hope that the economy doesn’t crash because once you’re out of a job, good luck funding that $400,00 a year hole in your pocket. By living modestly, you can relieve your stress and sleep well at night. Ostentatious living creates stress over your bills.

Like the media has mentioned, some people are actually seeing the bright side in this recession. They’re able to turn away from the illusion of happiness (spending money on consumer products) and find what truly makes them happy in their life: their family and friends. While money, to a certain extent, can bring you happiness, ultimately, 90% of happiness in life comes from who you decide to spend the rest of your life with and your friends.

I once told an ex-girlfriend how much I was making, and she said “wow!”. I didn’t really pay attention to her reaction, but when we were having a private dinner with some friends, she shared how much I was making to everyone. Everyone. It was pretty embarrassing, as I knew what would eventually happen. My friends started hating me. If my mother’s taught me anything, it’s that people (for understandable reasons) hate the “rich” (even if you’re not that rich but just live a better than average life). Just look at Occupy Wall Street. “Rich” seems to be the dirty word; just to say that you’re rich will seem like you’re showing off (even if you’re not), which others will hate. And if you do try to live an ostentatious lifestyle and show off, then people will have all the more reason to dislike you. So if you live modestly, people won’t hate you (at least for financial reasons)! I have a friend who acts like she’s pretty poor (when in reality she’s actually insanely wealthy). I asked her “why do you do that? With your money, you could be doing a lot of things.” And she said “because if I live modestly, a lot of people will help me out of sympathy and respect”.

Above all, being frugal and living modestly simply creates a more carefree, spiritually rich lifestyle.

Editor’s Note: Rick approached me to do this guest post last week. Based on the back and forth we had been having and the quality of his blog, I happily obliged. If anyone other bloggers are interested in doing a guest post, please contact me.

On a side note, after scheduling Rick’s post I found out that he made some big mistakes within the personal finance blogging community a little while back. I personally do not condone his previous actions, but we had a good chat about it and he does sound like he is genuinely remorseful. So hopefully others are willing to give him a second chance and allow him to redeem himself.