Realizing the Importance of Side Income 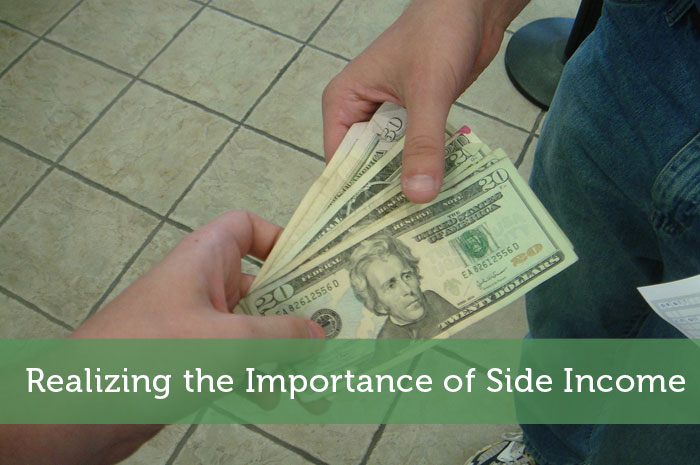 Recently my friend Shannon from The Heavy Purse e-mailed about a special she was hosting for financial literacy month. Normally I wouldn’t think much of these initiatives and would politely decline. I’m a big believer of the need for increased financial literacy though. So I was happy to take part.

The theme that Shannon requested was “your biggest money a-ha”. I considered writing about how I got serious about finances a couple years ago during a major life transition, but really I started getting more serious about my finances long before that. I simply got more disciplined with them a couple years ago. Instead I’ll be writing about how I learned just how important side income is.

It was my first boss after college that really got me thinking about a side hustle. Thinking back it might have actually been a way to keep me around longer at a low wage. After all, if my overall income was high enough, maybe I’d stay at an easy going job.

I forget her exact wording but the gist of it was that to get ahead in this world, you need to find a secondary source of income. If not, the government just takes too big a chunk of your income and you’ll manage to spend the rest. That was how she and her husband built up their business anyway.

The other reason she may have been pushing that was because she could see I was developing skills that would be perfect for entrepreneurship. She probably saw that between my programming and marketing experience I could easily be developing some kind of online business. It was just a matter of getting the kick in the ass to start the ball rolling.

Once I actually began pursuing a second source of income, I was hooked. The time I was spending watching tv was suddenly going to trying to increase my income. It became a challenge to try to boost those profits, thinking that it could turn into a full time gig. Eventually it did just that very thing and became my full time income.

In the end, the gravy train dried up forcing me to get another daytime job. Still, that side income was able to more than hold me over between those jobs. That wouldn’t be the last time either. On another occasion history repeated itself as I found myself without a job, but with a backup income stream picking up again.

Not only has my side business brought in money while unemployed, but it’s also brought in a nice chunk of change on top of my daytime job salary. This has allowed me to work where I choose rather than being forced to chase the high-pressure corporate jobs. It’s not that I’d pass up those corporate jobs. Actually being able to land those limited positions is another story.

Besides financial short term financial benefits, there is also the emotional gratification of finding ways to support myself without a boss. While I do have a daytime job, it gives me a sense of security knowing that I’m not tied to my job. If necessary I could always try to revive my side business. Perhaps when we have kids it would be the ideal time to make the transition and be a stay at home dad. Who knows.

If all goes as planned, there might be some real long term potential in my side business. Other similar ventures have developed into very significant payoffs when a bigger company buys them out. Time will tell if that is in the cards for me, but that possibility is encouraging. It’s like having a lottery ticket that I can keep increasing the odds of by putting in more work.

Creating Your Own Side Income

Building up a full side business might not be for everyone, but it’s worth considering if you’re struggling to get ahead. If you can fit in the time, pretty much everybody has the ability to bring in extra income one way or another. The best route may not be obvious though. Get researching online and try to figure out what might work best for your situation. Then simply dive in to test the waters. You might be surprised with what you can achieve.

17 thoughts on “Realizing the Importance of Side Income”