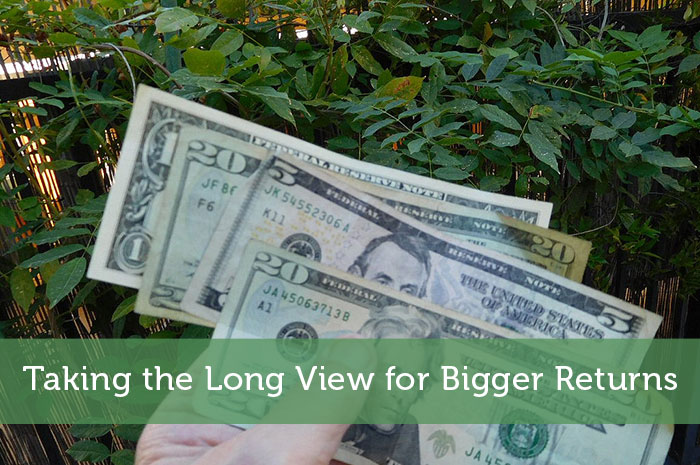 A lot of people think of investing as a high-stakes game in which playing fast and loose and getting in and out at just the right moments are the keys to making the fabled big score. However, that runs counter to the advice of many of the most successful investors, whose experiences in the market have demonstrated that the best strategies tend to involve thinking and planning for the long term instead of the quick return.

Carl Richards discusses the issue in a piece in the New York Times, in which he outlines the counterintuitive nature of long-term investing in terms of human evolutionary drives. He says that thousands of years of survival pressures have essentially primed the species to avoid potentially dangerous or hurtful situations. By contrast, those same pressures encourage the pursuit of safety and enjoyment. It’s obviously more enjoyable to succeed in the market than it is to lose money. These instinctual drives help to prompt otherwise level-headed people to engage in often costly cycles of selling when a stock loses some value and buying when a stock surges.

The basic drives behind buying high and selling low often lead to a noticeable shortfall in investment performance when compared to the gains that could have been earned by buying a stock and holding it. Note that Motley Fool stock picks are also great for a buy-and-hold strategy.. Richards calls the difference between the possible return from holding an investment and the return experienced by following instinct the “behavior gap.” According to his theories, the behavior gap explains why, for instance, a typical investor in an average U.S. equity mutual fund saw a return of only 6.52 percent over 10 years in 2013, even though the fund’s 10-year performance was 8.18 percent.

The Motley Fool Stock Advisor points out several reasons to invest with a long-term outlook, arguing that investors who settle in and allow holdings to work for them over an extended period may be afforded unique advantages over those who focus on making money quickly. The potential positives identified included the following:

The value of maintaining holdings over the long term is well known to such power players as Ken Fisher, who calls trading “the most common investor mistake.” The Ken Fisher success story demonstrates the value that can be built in portfolios that are allowed to mature over time. Fisher believes that those who want to achieve long-term financial success need to first invest a lot of thought and time into the decisions they make regarding their choices of investments. That way, investors can feel more comfortable sticking with their decisions over long periods of time.

As can be seen by looking at performance data over time, the best plan to help build wealth in the long term is most likely one that approaches wealth management as a long-view pursuit. Choosing investments carefully, managing instincts, and cultivating patience could lay the foundation for a strategy that, while perhaps not quite as exciting as “playing the market,” may produce significantly better returns in the end.