According the England’s Royal Mint, a new 12 sided 1 pound coin has been released into circulation this week. The mint has released around 300 million of these coins so far. This is the first time the 1 Pound coin has been changed for over 30 years. The mint has built into each coin a hidden security feature to stop counterfeit attempts. The royal mint says that the special material inside the coin itself will be detected electronically when it’s scanned by coin deposits or payment machines. The coin also includes an image that acts as a hologram for an extra measure of security. Furthermore, there is micro sized lettering inside both frames of the coin. According to the Royal Mint of England, this is the most secure coin in the world. These new coins are being minted at a rate of 2000 every minute.

“A showcase for the latest technology, as well as time-honored skills honed over The Royal Mint’s 1,000-year history. It has been designed to be fit for the future, using security features that aim to safeguard our currency for years to come.” 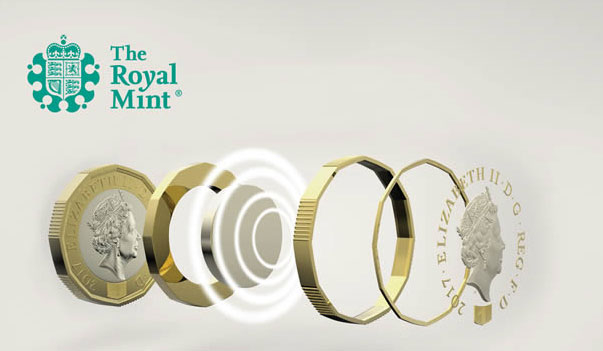 Here are some features of the new coin.

As the new coins gradually become more widespread, people are encouraged to trade in their old existing 1 Pound coins. Consumers have have until the 15th of October to either spend or exchange their old 1 pound coins. After October 15th, the old coins will no longer be legal tender. There’s an estimated 400 million 1 pound coins in savings jars. So all of those jars will need to be cashed in. This should also be good for the country’s GDP as all that extra change enters into the economy. This would increase the velocity of currency. The old coins will be gathered by the Mint and melted down to make the new coins. The extra security features in the new coin should combat counterfeiting and restore people’s confidence in the 1 Pound coin. Currently 1 out of 40 existing 1 Pound coins (the old ones) in circulation are fake. Perhaps other countries like the United States can use similar technology on its coins in the future.

Making coins difficult to counterfeit is one thing. But preventing people from stealing a coin is another matter. Earlier this week German press has reported that thieves broke into Berlin’s Bode Museum and stole with a massive 100-kilogram (221-pound) gold coin worth about US $4 million. The coin is in the Guinness Book of Records for its purity of 999.99/1000 gold. It has a portrait of Queen Elizabeth II on one side and maple leaves on the other. The Bode Museum, located on the German capital’s UNESCO-listed Museum Island, houses one of the world’s largest coin collections. Its collection includes 102,000 coins from ancient Greece and about 50,000 Roman coins. The museum doesn’t own the large gold coin. It merely holds it for someone else. Hopefully there is adequate insurance to cover the stolen item.