The Place of Forex Trading in a Diversified Portfolio 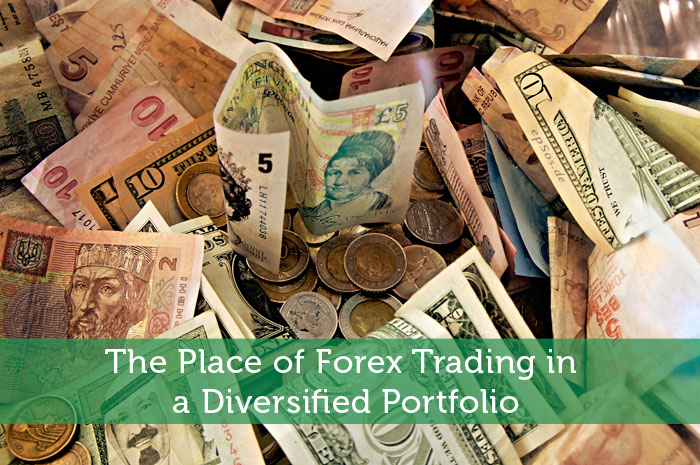 Forex trading is something you see a lot in the personal finance blogosphere. So I think it’s important to write about, to explain the ins and outs, and help my readers make educated decisions when stepping into Forex investment. For those reading about this for the first time, Forex is short for “foreign exchange” and officially refers to the trade of one currency for another.

The two currencies will have been issued by different national governments. On the large scale, governments swap currencies to make trade deals, and because currencies gain and lose value every day, one side of the trade always gets a slightly better deal than the other.

On the smaller scale, individual investors can trade currencies to try to trade for a currency rising in value. You’ve seen a lot of this in the Bitcoin market, where early investors traded dollars for BCs and ended up with many times the value of their initial investment. This is an extreme example, but even greater returns are available in some forms of the Forex market.

A forex broker may also use another form of Forex trading in which investors don’t actually own the underlying assets they are investing upon. Instead, this form of day trading works much like betting on the outcome of a game. The trader will invest a certain amount of money at certain odds (called leverage points), hoping to cash in on a specific value outcome of a one of many assets, currencies, of financial products.

There are many different brokers, with lots of different rules. Different countries have unique regulations, as well, so it’s best to check these first when you are Forex trading for the first time.

So where does Forex trading fall into the life of a normal investor? Forex is one of the highest risk, highest reward investment forms. Because it is typically “played” on online forums with their own rules and interfaces, it’s almost like a game. And like any game, you’ll get better at it with time.

Experienced investors know the rhythms of Forex. They know how to leverage big wins against even successive losses. In this way, a Forex investor can get their investment “right” less than 50% of the time and still be way ahead financially speaking.

But it’s also really easy to lose. Because the different influences that cause fluctuations in currency value are so vast and varied, no one can truly know where these financial entities are headed. I’m not saying it’s all blind luck and that there isn’t an element of skill involved. But for a new investor, it’s easy to lose a lot quickly.

If this sounds like something you want to try, use the free play version that a lot of Forex brokers have built in to their systems. Do it for a day or a week, even. See how your decisions play out over dozens of trades, and see if you can actually make money in the somewhat long term. If you can’t, there’s no shame. This kind of day trading isn’t for anybody. But if you can, give it a try. Just make sure that the rest of your portfolio is stocked with lower risk, long term investments, to offset the high risk inherent in the Forex trading model.

Exclusive Bonus: Before investing in forex check out our report on 70+ forex brokers. Find out which brokers you need to avoid. Receive our exclusive report for free today.
Tweet
Share
Pin
Share
Categories:
, All Recent Currencies News, All Recent Investing News
Tags:
, forex