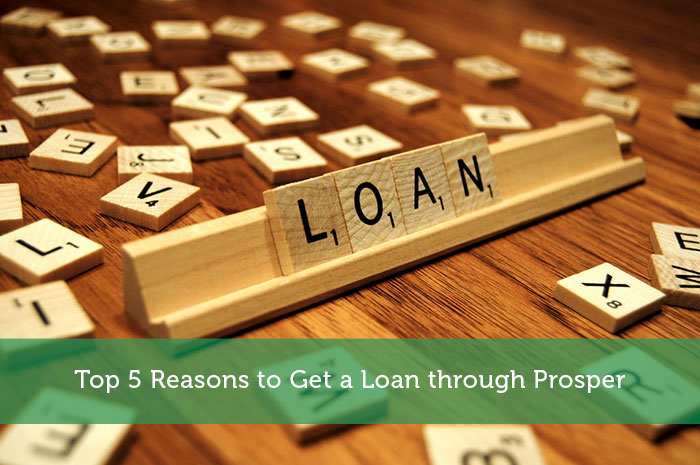 Prosper, like Lending Club, is one of several peer-to-peer lending companies that have given people a cheaper alternative to what is often found in commercial banks. Their credit requirements aren’t as strict, and they have lower interest rates – that is, if you have good credit.

Some people would find this method of borrowing money to be much easier, as the lower interest rates are very helpful in making it easier for them to pay it back. But like other loans, you will still have to prove your creditworthiness in order to qualify.

I want to talk about some of the top 5 reasons why you should consider getting your next loan through Prosper.

Compared to many commercial banks, Prosper loans tend to be lower, but that only applies if you have good credit report. If your history is a little shakier, you still might be able to qualify. But you won’t be able to get a lower interest rate. In fact, chances are it will be higher.

According to Prosper, you need to have a FICO score of at least 640 in order to qualify, but it is your credit rating that will determine how low (or how high) your interest rate will be. In fact, it might not be advisable to get a Prosper loan if you’re on the lower end of the spectrum.

Compared to many banks, Prosper loans are funded very quickly. It’s not uncommon to see a bank loan take several days to get funded. But because they come from individuals, you’re application’s process time is faster and you can receive money much quicker (as little as four business days). The best part is that the money is deposited directly into your account. Talk about great and fast service.

We all know that life can bite us in the rear end sometimes. I have experienced it many times myself, but is seems that many companies fail to sympathize with the difficult situations with which we are often faced. Banks are notorious for this, and I have seen it first hand as a foreclosure inspector.

There is always the possibility that you might miss a payment, and many banks are more than eager to charge high late fees that make it more difficult to catch up. Prosper, on the other hand, doesn’t do that. Their late fees are much lower than many commercial banks, which eases the burden of being behind.

Because of Prosper’s more lenient credit requirements, you don’t have to worry much about your credit cards and the pending bills you have. Prosper gives you the ability to borrow larger amounts than what you might be able to get at a commercial bank. In fact, you will be able to take loans as high as $35,000.

#5: Loans Are Funded by Individuals

I said before that Prosper loans are funded by individuals, which gives peer-to-peer lending a huge advantage over traditional loans. Many borrowers feel more compelled to pay them back, because they are funded by people and not some big corporation that’s more concerned about lining their own pocketbooks. Another great advantage is that, as you borrow money, you can also help fund loans that catch your interest.

Peer-to-peer lending platforms like Prosper have given people a more economical alternative than what they will be able to find at a bank. Strict credit requirements and high interest rates make it too expensive (and even impossible) to get a loan through any commercial bank. So for many, Prosper has given people an easier way to borrow money for their student, personal and business loans. It’s also a plus that they won’t have to deal with high late fees and endless monthly financial payments that can put a clinch into their ability to get back on track.

Filed Under: Financial Advice Tagged With: peer to peer, prosper