What does it mean to be wealthy to you?  For many Americans, it can mean being able to leading a life that is stress free, while having “peace of mind”.  Sounds pretty good, right?  On the surface, that doesn’t sound too much like money is the focus.  However, it could also be said that that same money, or perhaps, a lack of it, can lead to a certain stress factor.

According to Bloomberg, many Americans do not feel the need to admit that assets are able to purchase happiness.  A mere 11 percent of those who were surveyed for Charles Schwab’s second annual Modern Wealth Index selected “having lots of money” as what it means to be wealthy.  Interestingly, most respondents selected such high-minded concepts as their means for being content, they had no difficulty in attaching a number as to just how to get to that point in their lives.

That being said, to be financially wealthy and comfortable in America today requires an average of $1.4 million, which is up from $1.2 million a year ago, per the survey.  You might ask what’s the net worth needed to be “wealthy”?  That would be an average $2.4 million, which is the same as last year in the online survey of 1,000 Americans between age 21 and 75. 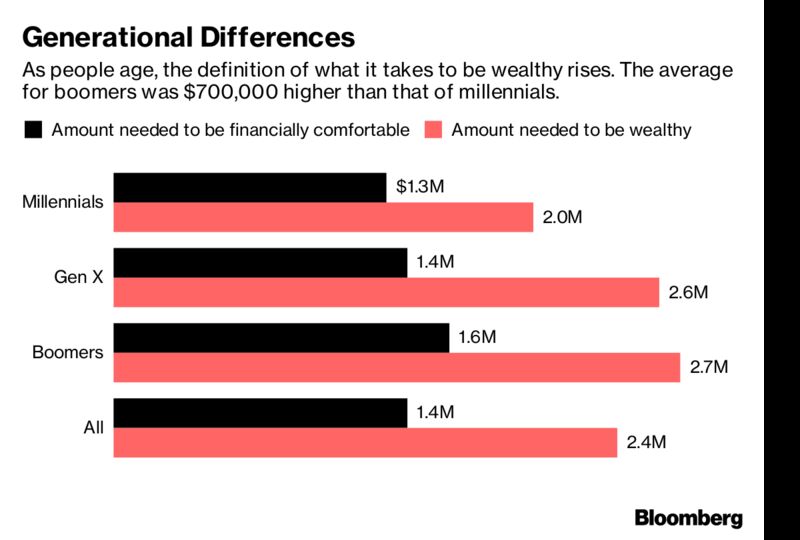 All You Need Is “Wealthy” Love?

With that, there were some other positive findings in the results.  Despite 18 percent having defined being wealthy as being able to afford anything they wanted, 17 percent mentioned that it was “loving relationships with family and friends,” as the true meaning of wealth and fortune.  “I realized that money is nothing more than fuel,” said Joe Duran, CEO of money manager United Capital after building and selling his first company. “It is a resource that lets you have choices, but if you don’t think about what you are working for, you will die rich but not live rich.”

The survey also asked respondents to select which of the below statements came closest to their personal definition of being wealthy. When asked about what made respondents feel “wealthy” in their daily lives, the survey found that family time was most commonly cited, at 62 percent overall.  Following that was what we all seem to pursue in some shape or form, cited at about the same level across generations: “taking time for myself,” which came in at 55 percent.  Alas, it can be rough to accomplish either “wealthy” feat without having some money to go along with it. 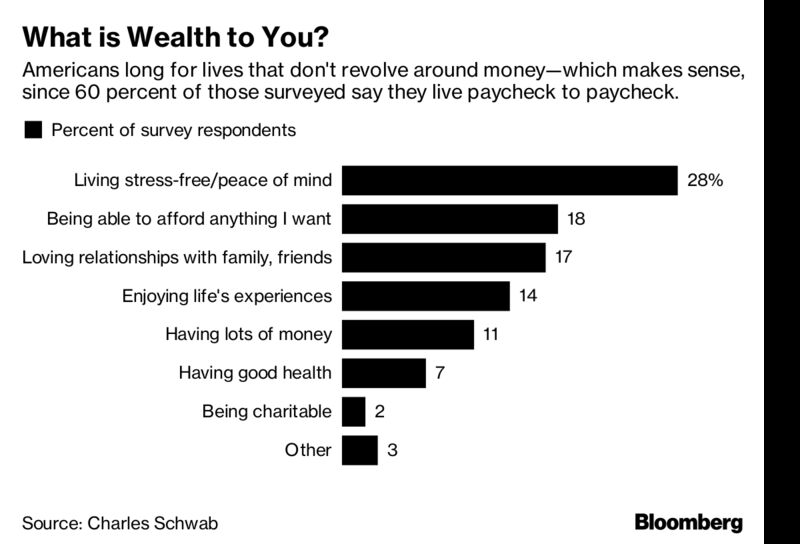 You Can’t Be Wealthy Without a Little Luxury, Right?

Not surprisingly, it was found that the little things can matter, too, especially when it comes to luxury.  The numbers found that 41 percent of people decided that having meals out or food delivered made them feel “wealthy” in their daily lives.  Even services such as Netflix, Spotify or Amazon Prime were able to help make 33 percent of respondents feel richer, particularly millennials at 44 percent, compared with 29 percent for Generation X and 23 percent for baby boomers.  Some of the write-in comments for what made people feel “wealthy” included “access to healthcare,” “being able to help close friends and family financially” and “just waking up in the morning.” 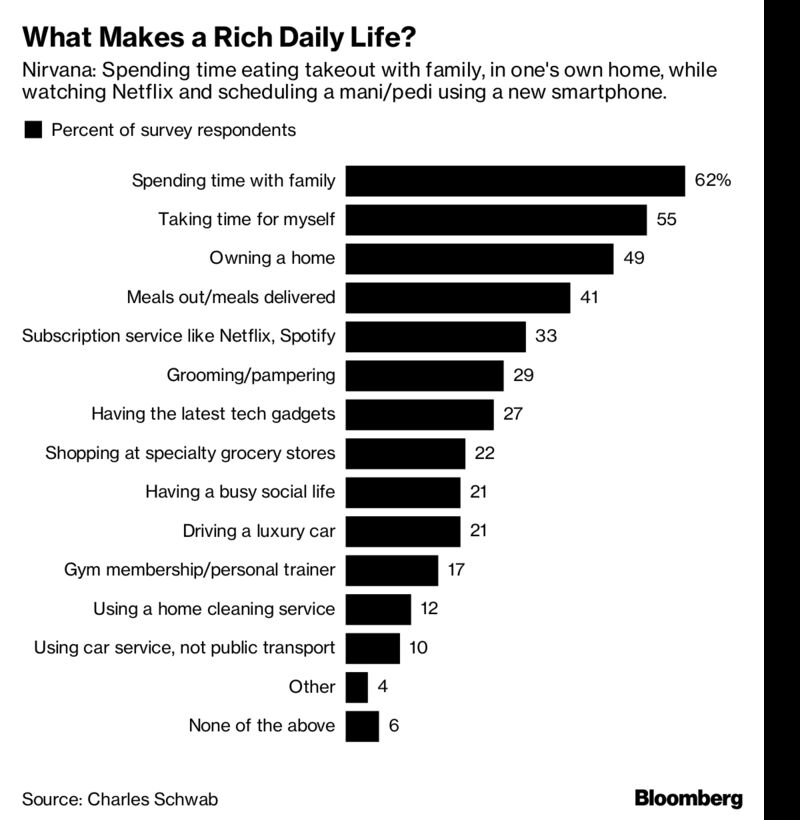 For all the bashing that millennials may sometimes receive, it can’t be discounted that their young optimism was clearly visible when thinking about their finances.  A large 64 percent of twenty- and thirty-somethings feel that they will be wealthy, when it comes to money, at some point in their lives, versus 22 percent of baby boomers.

Regardless though, the bottom line is that the survey underscores that those with a written plan for their finances feel more stable, period.  Despite that though, 52 percent of baby boomers, mentioned they didn’t have a plan in place because they didn’t have enough money to need a plan.  Almost sadly in some ways, respondents who chose “other” to explain why they lacked a financial plan wrote in responses such as “I have trust issues with financial people, especially after the 2008 crisis” and “all my information has been compromised by criminals.”

Optimistically, the survey found that some 49 percent of people said that saving and investing is “the key to wealth,” with another 40 percent choosing “hard work.”

Author Bio: With a background in accounting and finance, Matt Tilmann is the founder of Script-Notes, where he spends time to save readers both time and money, by offering the latest deals, savings and other news of the day in the world of tech, current events and personal finance.