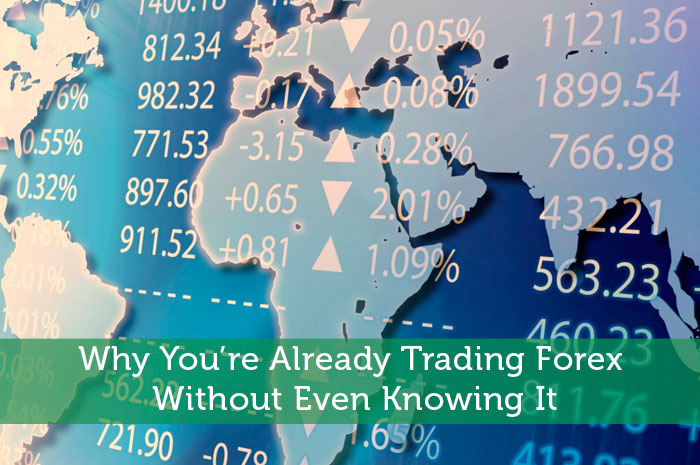 You’d basically have to be living outside of civilisation to not have heard of forex trading at this point in time, but for most people recognising the word is as far as the understanding goes. The actual nature of forex trading and what it involves is something that is most definitely not common knowledge, and yet despite that, you are affected by it every single day. One could even go so far as to say that at some point, almost everyone in the modern world trades currencies, sometimes without even knowing they are doing it.

Before we go any further it will be useful to give a quick overview of what forex trading is and how it is achieved. The name itself is an abbreviation, as forex is simply a shortened version of ‘foreign exchange’. Foreign exchange is the practice of trading one currency for an amount of another currency and generally we will be talking about the currency of two different countries (although instances of more than one currency in a country do exist). Forex trading at its core enables trade between different countries, such as China buying coal from Australia with Yuan.

However, due to the rapidly evolving nature of economic systems, the forex market has also become the mechanism by which currencies are valued against each other due to supply and demand for those currencies. Currencies that are in demand due to their countries economic position will rise in value, and those in lower demand will fall. In this manner, the market decides just how valuable any currency is compared to another. In the trade these comparisons are called currency pairs, an example of which would be AUD/USD, which would be comparing the value of the Australian dollar to the United States dollar.

But how are you, just an everyday person going out their business, getting involved in forex trading without even knowing about it? It happens far more often than you think.

Whenever you buy something online, you might well be forex trading. If the seller is in a different country, the price for whatever you are buying will have been set to a level that provides a healthy profit on the item for the seller, in the currency they are selling in. Any variation in the value of that currency compared to your own, would alter the price you pay. For instance if you were buying vitamins online from the US and you lived in Australia, the actual price you pay would depend on how the Australian dollar was doing at that time compared to the US dollar. If you had bought $250USD of vitamins in August 2014, the would have cost you $268AUD, but if you bought the in March of 2015 those same vitamins would cost you $333AUD. That is an increase of $65AUD, for exactly the same item. So it pays to buy your vitamins at the right time.

Another time you’ll be forex trading without even knowing is whenever you buy consumer electronics. As most electronic devices are now made outside Australia or the USA, their price is directly affected by global currency markets. The same situation appears with regards to fashion clothing, although Australia is far more affected by this than the USA due to taxation of incoming goods.

One more example of when the average consumer might find themselves forex trading is whenever we go traveling overseas, though people are a bit more aware of the transactions going on at this point. Every time you use your credit card or withdraw money from an ATM, that money is passing through the forex market, being traded from one currency to another and then being made available to you at the end of that process.

So even though forex trading and currency markets might sound complicated and to a lot of people very boring, you’re actually involved in them pretty much every day.

Filed Under: All Recent Currencies News, All Recent Investing News Tagged With: forex