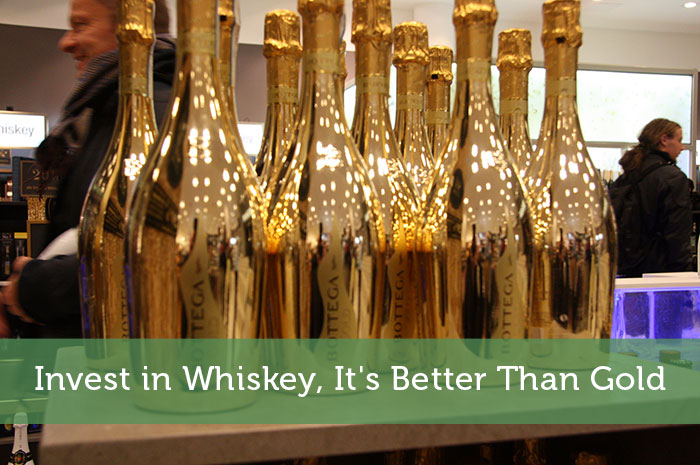 While it gathers dust on your shelf along with your other spirits, you may be surprised to learn that your whisky might also be gathering interest—significant interest at that. Scotch single malt whisky (as opposed to whiskey-with-an-e, which includes bourbon and blended malts) is gaining in popularity, which is leading to something of a shortage.

This has consequently led to a major boon for whisky on the stock exchange; last year, the leading stock index for scotch surpassed that of wine, which fell by 10%. As gold and currency falls in the financial markets, whisky is fast becoming one of the more lucrative investments available.

The scarcity of scotch is what has driven investors to it as an asset in much the same way as they once had been towards wine. Over half a decade before the recent whisky boom, companies were reported to have begun using whisky as a pension fund—a mocked decision  at the time, though one which is clearly paying off for the company’s retirees now.

It can be difficult to know where to start when investing in whisky; auction houses frequently take a cut of up to a quarter, but allow investors to deal in larger quantities. Meanwhile, private whisky investment firms take a smaller commission (around 10%), and can provide clients with  a more bespoke service.

The rise of Japanese whisky

It isn’t just traditional scotch which has undergone a boom; Japanese whisky brands such as Yamazaki and Karuizawa are selling for tens of thousands of pounds at auction, with a 1960 bottle of the latter fetching the highest price for any Japanese brand to date. The high demand for these spirits has led some to worry if its success will be short-lived as demand outstrips supply, however this is arguably the same logic which has driven the success of the scotch market.

New distilleries are opening across Japan, taking direct inspiration from the the peaty single malts of distilleries on the Scottish island of Islay. It has also been noted that Japan’s reawakened interest in whisky production stems from its rich history in the creation of sake. Meanwhile, the controversial Trans Pacific Partnership—so hotly debated during the US Presidential campaigns—is expected to increase the flow of American whiskey to other countries, boosting its significance to the American economy.

In October, the price of gold fell by the sharpest levels in nearly three years. Usually, these variations in value are prompted by world events such as Brexit however, in this instance, one journal described the cause of the plummeting price as “just a vague sense of foreboding.” While this “sense of foreboding” is unlikely to hit the whisky markets as hard as gold, timing is key, as with any investment. With whisky stocks low, demand is high, and one further way in which the whisky industry follows wine is the rise in forgeries; wine brokers have developed comprehensive valuation guidelines which allow collectors to sniff out fraudulent vintages.

It’s uncertain how long the whisky investment bubble will remain unpopped, but as the gold economy continues to fluctuate, it turning to alcohol for solace may actually wind up being one of the smarter decisions you could make in these uncertain times.

Filed Under: All Recent Commodities News, All Recent Investing News Tagged With: gold